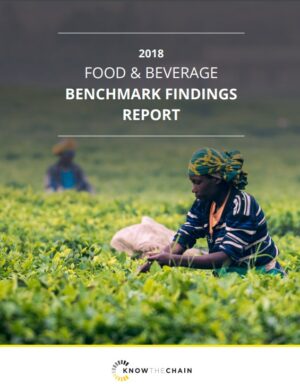 KnowTheChain evaluated 38 of the largest global food and beverage companies on the forced labor policies and procedures that each company has in place. This report marks KnowTheChain’s second food and beverage benchmark since it was launched in 2016. Unilever remains the top-scoring company.

The 38 Food and Beverage companies were assessed across the benchmark’s seven themes, which were developed to capture the key areas where companies need to take action to eradicate forced labor from their supply chains: commitment and governance; traceability and risk assessment; purchasing practices; recruitment; worker voice; monitoring; and remedy. There are a total of 23 indicators across the seven themes. Each theme is weighted equally and determines the company’s overall benchmark score on a scale from 0 to 100.

Key findings from the 2018 benchmark include: