The dust has settled in Sharm el-Sheikh. Pavilions are gone by now, and smooth-tongued leaders that tried to agree on outcomes have left the stage. Linda Lap of Cordaid’s FairClimateFund, who attended Egypt’s climate summit, takes stock.

“What I was hoping for? For promises to be kept. Thirteen years ago, in 2009, rich countries pledged 100 billion USD to climate aid for low-income countries. Annually. That target has never been met, not a single year. In the meantime, industrialized countries’ emissions are rising and climate catastrophes increasingly cause loss and damage in places that contribute least to climate change.

Last year, at COP26 in Glasgow, the Netherlands promised to stop supporting the fossil fuel industry. It turned out to be an empty promise. And there is nothing to indicate that the Netherlands will fulfill that other promise – to reduce CO2 emissions by 55% by 2030.

Decisive action, that’s what I hoped to see at COP27.

And so we went to Sharm el-Sheikh, me and my FairClimateFund colleague Neera van der Geest. We also represented Cordaid. And we teamed up with colleagues from CIDSE and Caritas, and with other Dutch NGOs, such as ActionAid Nederland, Both Ends, CARE Nederland, Hivos, Oxfam Novib.

There were three things we wanted to be heard in the noise of the Sharm el-Sheikh summit. We highlighted them in ‘side events’, by demonstrating and sending press releases, and in our meetings with country delegations.

Our first message: countries that are most vulnerable to climate disasters need more money. A lot more. 36 million people in the Horn of Africa need the resources to deal with years of devastating drought. People in Pakistan and Bangladesh need the funds to properly deal with mega-floods.

The COP27 outcome: the agreements that government leaders have finally agreed on are far from sufficient to provide substantial support to communities that are most affected by climate damage worldwide. Commitments were mostly symbolic.

In the end, something important did pop up. Low-income countries secured a fund to support the victims of climate disasters. One could call this a milestone. But it is still unclear what it will entail. And compensating for loss and damage when we’re not cutting emissions and winding down the use of fossil fuels is only putting the cart before the horse.

COP27 outcome: too little progress has been made in the transition of food systems. To try and stay positive we can say that, at least, the subject is now on the agenda.

Our third point: reduce CO2 emissions, and make sure that CO2 compensation is not a tool for greenwashing but an effective tool to address climate injustice. By ensuring that money from the carbon credit trade helps farming communities in low-income countries to adapt to climate change. This makes the transition to carbon-free economies fairer. As the carbon market is expected to grow explosively in the coming years, doing this will only become more urgent.

Outcome: most negotiations on new agreements in the carbon market failed. One positive point: there will be a new kind of carbon credit that allows fossil companies to contribute to CO2-reducing climate projects in vulnerable countries, without those companies being able to claim it as their own CO2 reduction. It helps to prevent greenwashing. This is why FairClimateFund supports this new type of carbon credit.

Grand statements, no thank you

Did Sharm el-Sheikh bring what I hoped for? No. Too little progress was made to address existing climate disruption. Let alone prevent even more disastrous disruption in the future. Even sticking to the 1.5-degree temperature rise suddenly had to be defended in Sharm el-Sheikh.

Sure, world leaders made grand statements. They always do. Climate action just had to be ‘firmer, faster, fairer’. “We need to take more action and deliver on the promises we made,” Dutch Prime Minister Rutte said. “You can count on the Netherlands”, he said about the call for solidarity from rich countries with countries from the South.

Alas. Climate activists in the Netherlands keep on demonstrating against the Dutch billion-euro subsidies for the fossil industry. But Rutte doesn’t budge. And yet, this is about the same call for solidarity. Cutting emissions means less suffering.

More than ever it’s up to us, citizens

It is a good thing that leaders talk and negotiate at the very highest levels about how to tackle the climate crisis. But it takes too long. And they are indecisive.

If top-down doesn’t work, then it has to be bottom-up. More than ever, the ball is in the court of citizens. ‘We’re the planet’s crew’, says Babette Porcelijn, someone who inspires me a lot. Let’s make our own manual for a happy scenario. By consuming sustainably, eating plant-based, and traveling as fossil-low as possible. By not wasting food, water, or goods.

And we, citizens, can force governments and companies to take action. By taking legal action. Climate activists from Urgenda and Milieudefensie have paved the way. By joining the climate activism of Extinction Rebellion.

Let’s keep up the fight for a sustainable future. It’s what I will do in my personal life. And with FairClimateFund and Cordaid I will keep fighting climate injustice. Because it’s just not right that people who contribute the least to climate change bear the brunt of the Global North’s fossil fuel addiction.

We can’t wait until the next climate summit. Time is a luxury we have lost a while ago.” 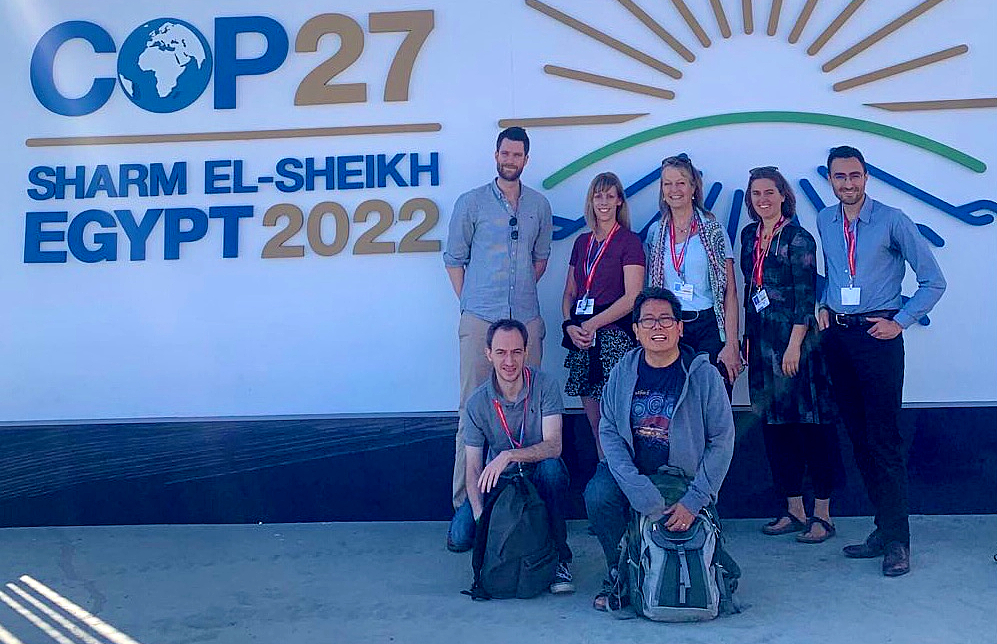 Linda Lap and Neera van der Geest from Cordaid’s FairClimateFund (2nd and 3rd from the top left), with other members of CIDSE. Image: FairClimateFund