During my business studies in the 1990s, I learned the narrow answer to that question: the return on invested capital needs to exceed the cost of capital. But that answer is problematic, as by that definition tobacco companies are among the best in the world – even though they destroy tens of billions of social value (health) every year in the Netherlands alone. Ecological costs are also not included in the narrow financial definition. This makes us largely blind, and we continue to overexploit our planet and society. How, then, can we ensure that companies operate within social and planetary boundaries?

Such a sustainable form of capitalism is certainly possible, if we focus on broad value. That means that enterprise value includes not only the financial value, but also the social and ecological value that the company creates or destroys. Such value is barely mapped out yet, but is ideally measured and reported as thoroughly as financial value. If companies do that, they can steer for and achieve better social outcomes, often with better financial results too. Governments can then finetune their taxes and regulations so that fairer prices are charged for products – prices that also include the hidden costs of issues like pollution and health damage. This requires change not just in businesses, but also in the financial sector, governments, and education. This change can be illustrated by the contrast between Air France-KLM and Novo Nordisk.

It is tragic that Air France-KLM is being bailed out by the government. Because this is just the kind of company that scores poorly on broad value. Our RSM case study concludes that the company destroys financial, ecological and possibly social value on balance. The negative financial value is evidenced by years of low or negative profit levels, despite the lack of both tax on kerosene and VAT on airline tickets (taxpayer subsidy). The strongly negative ecological value is visible in emissions of 32 million tonnes of CO2 per year, which at a shadow price of € 100 per ton amounts to € 3.2 billion hidden (the CO2 requirement price will only increase as long as real action is not taken) ecological costs per year (160 per cent of profits in 2018). And that’s even without the cost of the degradation of the other planetary boundaries, such as biodiversity and nitrogen. These cannot be quantified in the absence of data but are also negative. Social value is a big question mark. On the one hand, the group creates positive social value by providing workers with jobs and enabling people to travel. On the other hand, flying causes nuisance to people who live near the airport, seems to negatively affect health, is too cheap (due to the lack of kerosine and/or environmental taxes), and a subsidy from poor (barely flying) citizens to wealthy (often flying) citizens and businesses. And what about the very high salaries of pilots when the workload seems to be increasing for the other staff? In short, even before the Covid-19 crisis, Air France-KLM was a company that effectively survived through subsidies, and most likely destroyed value for society on a structural basis.

Meanwhile, Air France-KLM’s annual report is mainly about the growth strategy – whereas growth is exactly what you don’t want when a company destroys value. There is little indication of thinking in broad value at Air France-KLM. Its annual reports say little about the mission, and how it should be reflected in strategy, revenue models and relationships with stakeholders. There is no serious estimate of the negative externalities (costs that they do cause but do not bear), nor do they indicate how such costs can be brought to zero. At least the group’s enormous CO2 emissions can be found in the report, but hardly anything is said about the deterioration of the other planetary boundaries, although flight movements, for example, cause a lot of nitrogen and aerosol. Sustainability initiatives are mentioned, of course, but are limited to drops in the ocean, such as the use of biofuel on flights to Oslo. The emissions reduction targets are so unambitious that they are far from the 2-degree-scenario of the Paris agreement.

Novo Nordisk show how it can be done

This contrasts sharply with the way in which the Danish company Novo Nordisk is run. The pharmaceutical company, founded a century ago by Nobel Laureate August Krogh, is very explicit about its mission, both on its website and in its reporting. Novo Nordisk’s mission is to defeat diabetes and other serious chronic diseases such as obesity and rare blood and endocrine disorders. It does so with innovative scientific breakthroughs, by expanding access to medicines (without major price increases), and by working on preventing and ultimately curing diseases. Novo Nordisk is built on the belief that ’the formula for lasting success is to think long term and do business in a financial, social and environmentally responsible way’. The way of working is laid down in The Novo Nordisk Way, ten core values according to which managers and employees are supposed to act.

The drafting of core values is very nice, but you must make sure that people act on them as well. This requires an ongoing process of dialogue and awareness. That is why Novo Nordisk has appointed some of its employees as facilitators who travel through the company to interview employees, managers and internal stakeholders; and examine documents and local business practices to assess to what extent the departments are governed in accordance with the Novo Nordisk Way. They identify areas for improvement and share best practices.

The company has been doing this for years, and recently it has gone even further, by performing a Future Fit analysis. Management was tired of the usual sustainability approach to reports and questionnaires. These take a lot of time, do not help to develop a long-term vision; and provide uninteresting statistics and marginal improvements. Future Fit, on the other hand, uses a set of critical questions to determine to what extent the company operates demonstrably sustainably (break-even goals), and to what extent it helps others to operate sustainably (positive pursuits). The analysis took several months, and with the help of consultants, the process was validated externally.

On this basis, Novo Nordisk gave itself a low grade, which was also communicated externally – a form of honesty that you rarely encounter. The exercise also produced a solid list of points for improvement.

While many company sustainability reports tell a fun and positive story, you also have to show the pain: what is difficult? What’s still not going well? What do you resist? Are you willing as a company to admit that you’re causing harm too? In that way you build trust and credibility, and you’re better off coming through a crisis. In 2013, for example, Novo Nordisk was accused of tax evasion, but the share price hardly suffered because investors did not immediately lose confidence in management.

The fact that Novo Nordisk is pioneering Future Fit is not exactly surprising, because it fits the company culture. Moreover, its management has more leeway than many others: The Novo Nordisk foundation has a controlling interest in Novo Nordisk and sister company Novozymes. The foundation monitors the mission of both companies, protecting them from hostile takeovers and other short-term pressures of capital markets. According to mainstream finance theories, this is weak governance (too little disciplining effect would make management lazy), but according to Oxford University Professor Colin Mayer, it is an important part of the puzzle to encourage companies to create value in the long term. Mayer argues (in this book) that such companies live much longer than others, stay closer to their mission and do at least as well financially.

In defense of Air France-KLM, it must be said that its circumstances are unfavourable. Unlike Novo Nordisk, the airline has a difficult business model and not a majority shareholder to protect the mission. That applies to many companies, and they can use some help to overcome these barriers. As for the revenue model, Air France-KLM could focus more heavily on fuel savings; and forge alliances with high-speed trains for short-haul flights. But there are limits to the extent to which Air France-KLM can make its revenue models more sustainable without facing competitive disadvantages. This would be very different if governments were to take broad value more seriously and impose serious prices or fines on externalities such as CO2 emissions and biodiversity degradation. Air France-KLM’s competitors and suppliers would no longer get away with anti-social activities; and Air France-KLM would be rewarded for its (hopefully) better performance.

The second barrier is the ownership structure. This could be changed at Air France-KLM, but then a majority of shareholders who want to do so will have to stand up, for example the Dutch and French governments. Unfortunately, governments are also not used to thinking in broad value and focus mainly on budgetary effects. Most other stock-listed companies are effectively owned by the financial sector, which has a great influence and could potentially do a lot to create broad value. For now, however, the financial sector mostly acts as a huge vacuum cleaner that sucks up as much short-term financial value as possible, at the expense of ecological, social and long-term financial value. This needs to change. New mission-driven financial institutions can lead the way and can, for example, help to finance small projects with high social value. But above all, the sector will have to be called to order by governments. The EU taxonomy for green investment is a start.

Finally, culture and thinking are also very important. Most university courses in economics and business administration continue to train for the practice of the past century. Today’s students learn the same definition of value creation that I was presented with in the 1990s. At RSM, we make a difference by offering courses in sustainable finance that do present the broad value perspective. But more can be done in the curriculum. And other universities will need to step up their game too. We also need change to get rid of the perverse incentives that are still in corporate and tax law today. In short, we need solid institutional change to create a sustainable capitalism in which large corporations operate within social and planetary boundaries. 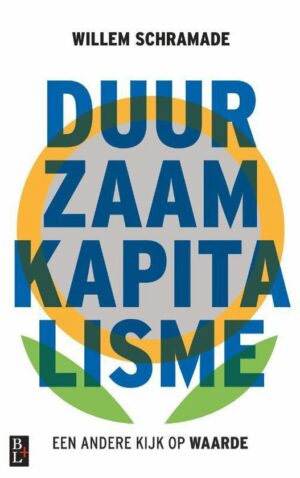