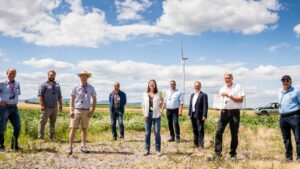 The BASF-initiated project “Effiziente Förderung der Artenvielfalt in ackerbaulich genutzten Landschaften” (EFA), which aims to increase the efficiency of biodiversity measures in agriculturally used land, was named one of the official projects supported by the United Nations (UN) for their Decade on Biodiversity.

As part of an event in Herxheim, Germany, in early July, the environment minister of Rhineland-Palatinate, Ulrike Höfken, awarded the recognition to the Georg von Neumayer Foundation as the project owner and to the project partners BASF SE, RLP AgroScience GmbH, and Farmer- and Vintner Association Rhineland-Palatinate South e.V.

“This recognition is given to exemplary projects that are committed to supporting biodiversity in Germany”, Livio Tedeschi, Senior Vice President, Agricultural Solutions, explains. “We are incredibly proud that our efforts in protecting biodiversity together with farmers have been recognized by such an esteemed body as the UN.”

The project, which developed out of the initiative “Biodiversity Region South-Palatinate” by BASF and the Farmer- and Vintner Association Rhineland-Palatinate South e.V. in 2019, is a collaboration. Members from the agricultural industry, environmental protection agencies, the sciences and the local industry work together to find sustainable, economically viable solutions that support biodiversity. The project is financed through funds from the Ministry for the Environment, Energy, Agriculture and Forestry in Rhineland-Palatinate and by BASF.

Michael Wagner, Vice President, Agricultural Solutions, explains the motivation that lead to the project: “Scientifically sound studies have shown that biomass and biodiversity have been in decline over the last few decades. At the same time, more than half of all landmass in Germany is used for agricultural purposes, which is why agriculture and farmland play such a large role in biodiversity.”

“Initiatives like ours, which come from and are championed by the agricultural industry, show that it is possible to integrate biodiversity enhancing processes in the field, without losing sight of the main goal of farming: producing safe, healthy, and sustainable food, energy sources and replenishable resources,” adds Markus Röser, Head of Communications, Public Affairs & Sustainability, Agricultural Solutions.

“At BASF, we support combining modern agricultural practices with high productivity and innovative solutions for protecting biodiversity, in order to find the right balance between food production and conservation efforts.”