Diana van Maasdijk, CEO at Equileap, explained: “We see that Dutch companies are beginning to pay attention to gender equality, even though the numbers remain on average far too low. Considering their global dimension, companies in the Netherlands need to realize that they can have a decisive impact on gender equality in their workforce as well as throughout their supply-chains. And, as you can not change what you can not measure, the first step is to publish gender equality data. Typically, a vast majority of Dutch companies (88 of the largest 100) do not publish information on the salaries of their male and female employees yet.“

Maria Bobenrieth, Executive Director, Women Win/Win-Win Strategies, commented: “We are excited to partner with Equileap on this groundbreaking report. The data found is a solid starting point for action in these unprecedented times. We believe the report opens an opportunity to imagine and take concrete steps towards a great correction in addressing gender inequality within the Netherlands’ business sector and throughout supply chains”.

Gender balance from the board to the workforce 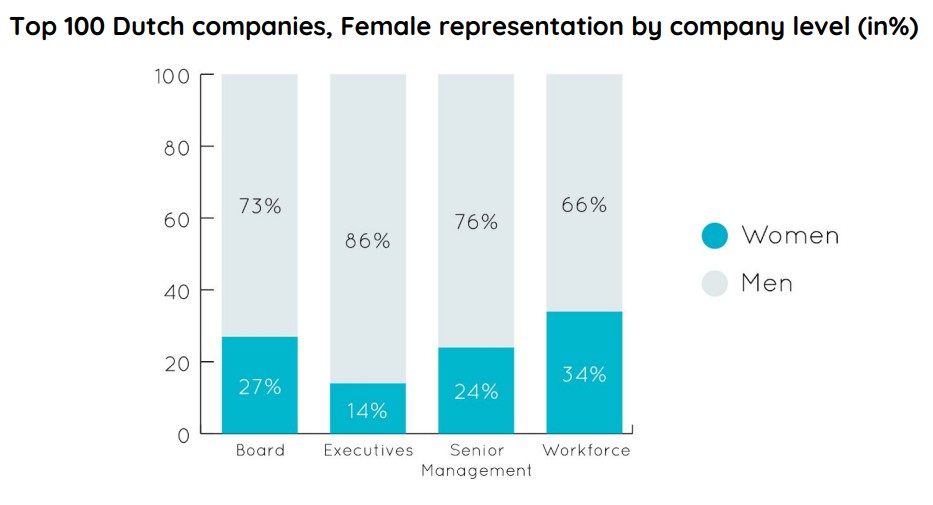 Unlike any other gender equality research, Equileap uses the world’s first in-depth cross-sector ranking system to assess and monitor thousands of companies across the globe. Its proprietary Gender Equality Scorecard™ consists of 19 criteria including gender balance across the workforce, the gender pay gap, paid parental leave and anti-sexual harassment policies.

The dataset for this report consists of the largest 100 companies in terms of market capitalization listed on the Euronext Amsterdam Stock Exchange as of 24 February 2020. It includes all unique companies on the AEX, AMS, AScX (74 in total), plus the next 26 largest companies on the AAX by market capitalisation, headquartered in the Netherlands. The research for this project closed on 10 July 2020.