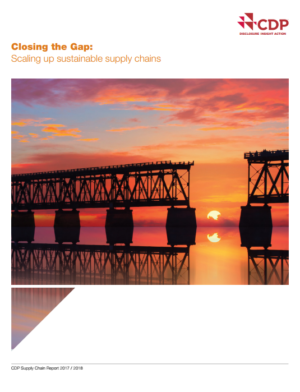 The number of companies forging ahead with an industry-leading approach to tackling emissions in the supply chain has doubled in a year,according to new research by CDP, the non-profit global environmental disclosure platform, with analysis provided by McKinsey & Company.

CDP has awarded 58 companies – out of a total of +3,300 – a place on its second annual Supplier Engagement leader board, double the 29 identified in 2017. These leaders – which include Bank of America, BT Group, Nestlé, Panasonic, Rolls Royce, Société Générale, Tokyo Gas Co. and Unilever – are recognized for their work with suppliers to reduce emissions and lower environmental risks in the supply chain.

The leaders are announced as more companies than ever before are looking at water security in their supply chains – leading to a 15% rise in suppliers disclosing water data to their customers through CDP in 2017 – and organizations including Klabin, L’Oréal and McDonald’s are among the first to work with CDP to tackle deforestation in their supply chains.
Examples of leadership among the 58 companies include:

Gabrielle Ginér, Head of Sustainable Business Policy at BT Group said: “We’re proud to be recognized on CDP’s Supplier Engagement leader board for our efforts to engage suppliers on climate change. Reducing our supply chain emissions is an essential component of our ambitious science-based target to help keep global temperature rise below 1.5°C. Working with suppliers through CDP’s supply chain program is crucial to driving this change.”

Closing the Gap: Scaling up sustainable supply chain practices, CDP’s Global Supply Chain Report 2018, is based on climate, water and deforestation-related data collected from 4,872 supplying companies across global supply chains at the request of 99 of the world’s largest purchasing organizations. Wielding a combined purchasing power in excess of US$3 trillion, these organizations include Accenture, BT Group, Cisco, KMPG UK and Philips Lighting.

Last week’s discussions at Davos concerning international trade – which is projected to grow fourfold by 2050, from a baseline year of 20101 – and the World Economic Forum’s recently published Global Risks Report 2018 – which confirmed environmental risks as the most significant facing humanity2 – has all highlighted the importance of addressing supply chains when tackling environmental challenges. This is especially significant because greenhouse gas emissions located in the supply chain are on average four times higher than those arising from direct operations.

“Delivering on the ambitions of the Paris Agreement will require businesses to play a key role to reduce emissions, manage water resources and limit deforestation within their operations and their supply chains,” commented Patricia Espinosa, Executive Secretary, United Nations Framework Convention on Climate Change, who has written the foreword in the report.

“I am pleased to see that an ever-increasing number of companies reporting to CDP are integrating sustainability-thinking into their business models and applaud the members of the CDP supply chain program for being pioneers in this regard. I encourage businesses to work with suppliers to raise ambition across their supply chain.”

The report – which includes commentary from The Carbon Trust – reveals that this leadership is paying dividends, as awareness of climate change-related risks and opportunities is increasing down the supply chain. Over three quarters (76%) of suppliers responding to CDP have identified some inherent climate change risks to their business and more than half (52%) report that they have integrated climate change into their business strategy.

There is huge potential for positive impact. Reductions equivalent to 551 million metric tonnes of carbon dioxide – more than Brazil’s total emissions in 20163 – were reported by suppliers worldwide in 2017. This is an increase from 434 million metric tonnes reported in 2016. Cost savings amounting to US$14 billion were reported in 2017 as a result of emissions reduction activities.

Yet, this impact is only a fraction of what could be achieved if all organizations at each tier of the supply chain were engaged and working to drive down emissions. Currently, less than a quarter (23%) of supplier respondents are in turn engaging with their own suppliers to reduce emissions, suggesting that many may be missing out on business opportunities and financial savings.

Dexter Galvin, Global Director of Corporates and Supply Chains at CDP, said: “Big businesses have for some time understood the importance of managing their Scope 1 and 2 emissions, but Scope 3 emissions, hidden in the value chain – and far greater in volume – are just as vital. While it’s encouraging that awareness of climate-related risk is filtering down the supply chain, it’s crucial that engagement and action follows. As our findings show, this not only makes sound business sense, but can result in considerable cost savings for both purchasing organizations and their suppliers.”

In addition to a global analysis, the report looked more closely into eight major economies* to compare how well-prepared suppliers are to mitigate environmental risk. It found that suppliers in some countries are taking a clear lead, while others are lagging behind:

Steven Swartz, a partner in the McKinsey & Company Southern California office said: “We’re seeing investors and businesses placing substantial capital into the low-carbon economy, driven by the expectation of sound long-term economics. This is a major opportunity for businesses to take the lead, and an especially good time for them to have impact as cost of clean technology continues to fall.”