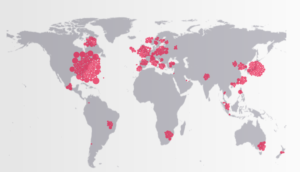 The world’s largest annual tracker of how the largest, most environmentally-impactful companies are responding to climate change is published today by CDP (the non-profit global environmental disclosure platform). Picking up the pace, the second edition in the annual Tracking corporate action on climate change series, finds that more leading companies are embedding low-carbon goals into their long-term future business plans, and that they are increasingly aligning themselves with the carbon emission reductions scientists say are needed to prevent dangerous climate change.

Fourteen per cent of a sample of 1,073 responding companies have future-proofed their growth by committing to or having targets approved under the Science Based Targets initiative[1]. These are emissions reduction targets in line with the level of decarbonization required to keep global temperature increase below 2 degrees Celsius, the central aim of the Paris Agreement on climate change signed by nearly 200 nations. An additional 317 companies (30% of the sample) aim to set science-based targets within two years. Existing targets take the sample almost one third (31%) of the way to being consistent with keeping global warming below 2 degrees, a notable improvement since last year (25%), reflecting the rise in science-based target-setting.

Key findings from today’s analysis include:

Paul Simpson, CEO of CDP, said: “Two years ago, the Paris Agreement fired the gun in the race to a low-carbon economy. This year, the recommendations from the Task Force on Climate-Related Financial Disclosures accelerated the pace. We can already see corporate winners and losers emerging. Best practice, from the scaling of solar power to the construction of zero-energy buildings, with innovation in processes, products and philosophies is emerging; and is increasingly led from the boardroom.

“That’s great news for those companies seizing the opportunity of the low-carbon economy, but the rest need to pick up the pace or risk losing out. The majority of the large corporations we analyzed do not yet appear to have the right, science-based targets in place to successfully transition their business in line with the Paris Agreement, although many have ambitions to take this step in the next two years. We strongly urge them to follow through and align their targets with climate science, to ensure their resilience in the transition to a well below 2-degree world.”

In a separate analysis, CDP ranked 160 companies (out of a total of over 2,400) as A-grade for their approaches to climate change, water and deforestation, working with scoring partners ADEC, CDP’s Global Climate Change Scoring Partner, and South Pole Group, their partner for Water and Forests scoring, to assess companies’ performance. For the first time these three rankings are released simultaneously, reflecting the holistic nature of the environmental challenges facing business today.

“Climate change is already affecting companies – both through the direct impacts of steadily rising global temperatures and through the policies that governments around the world adopt in response. At Unilever, we reduced CO2 from energy in manufacturing by almost two thirds over the past two decades and have set a bold target of being carbon positive by 2030, committed to sourcing 100% of our energy from renewable sources.

“Disclosure through the CDP platform is an important tool for Unilever to measure how we are performing against our sustainability plans and making progress to reduce our footprint. We are delighted to have been recognised as one of two companies to achieve straight ‘A’ scores across the rankings. Being a sustainable business goes hand-in-hand with being a successful business, as we drive profitable growth for our brands, save costs, reduce risk, and fuel innovation.”

CDP’s comprehensive 2017 analysis, Picking up the pace, assessed a sample of 1,829 companies, 1,073 of which responded to the request to disclose made on behalf of over 800 institutional investor signatories with assets of US$100 trillion. These responding sample companies represent 12% of total global greenhouse gas emissions. The sample was set in 2016 as a benchmark for corporate action on climate change and represents the most significant companies globally in terms of market capitalization and environmental impact.

Company examples named in the analysis include:

“As investors, the recommendations from the Task Force on Climate-Related Financial Disclosures have given us a very powerful mandate. The burden of proof to explain why climate risk isn’t an issue has shifted to companies. For those that recognize climate exposures, the new norm is that companies should be considering climate risk at the board level. The recommendations have created a new concept of climate risk governance. Disclosure of high-quality, comparable environmental data is at the heart of this concept.”

Picking up the pace: tracking progress on corporate climate action and the 2017 Climate, Water and Forests A Lists are available on the CDP website, which also includes rankings for thousands of companies that publicly disclose through CDP.

Dutch companies on the A-lists

The following Dutch companies are listed on the A-lists:

Unilever ranks on all off the A-lists: 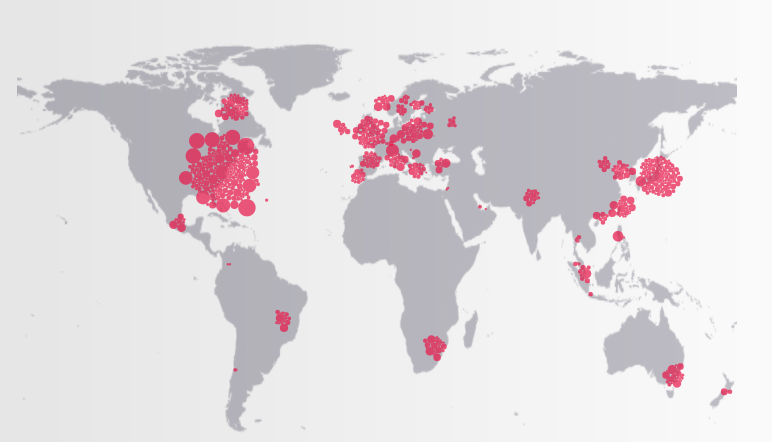 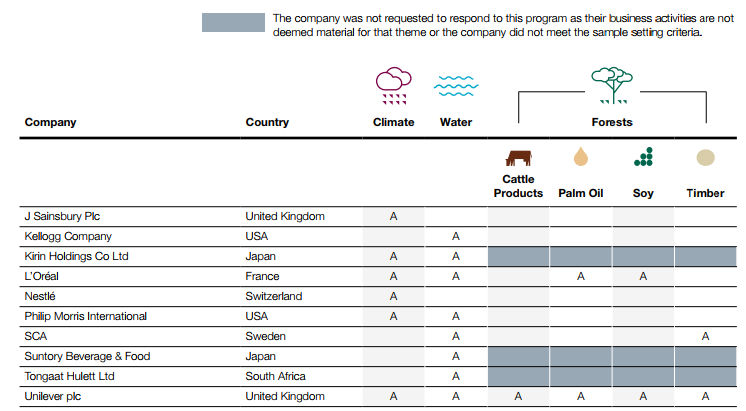