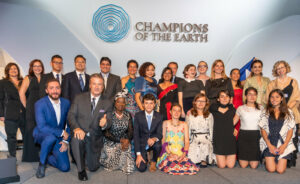 US outdoor clothing brand Patagonia has been named a UN  Champion of the Earth, receiving the UN’s top environmental honor for a dynamic mix of policies that has put sustainability at the heart of its successful business model.  The United Nations Environment Programme (UNEP) recognized Patagonia in the entrepreneurial vision category.

Since Patagonia was founded in 1973 by renowned environmentalist and entrepreneur Yvon Chouinard, it has won plaudits for its sustainable supply chains and advocacy for the environment. The company recently updated its mission statement to reflect the urgency of the environmental crisis: “We’re in business to save our home planet”.

From a small company making tools for climbers, Patagonia has become a global leader in sustainability. Its drive to preserve the planet’s ecosystems runs through the entire business from the products made and the materials used to the donation of money to environmental causes.

Nearly 70 per cent of Patagonia’s products are made from recycled materials, including plastic bottles, and the goal is to use 100 per cent renewable or recycled materials by 2025. The company also uses hemp and organic cotton. It is committed to simplicity, utility and durability — a novel undertaking in a world where fast fashion is the norm for many companies and consumers.

Since 1986, the company has contributed at least 1 per cent of annual sales to the preservation and restoration of the natural environment. In 2002, Chouinard and Craig Mathews, founder of Blue Ribbon Flies, created a non-profit organization — 1% for the Planet — to encourage other companies to do the same.

Thanks to its 1 per cent pledge, Patagonia has provided more than US$100 million to grassroot organizations and helped train thousands of young activists over the past 35 years.

“Through its commitment to sustainability and engagement with today’s most pressing environmental issues, Patagonia offers a perfect example of how the private sector can join the battle against climate change, biodiversity loss and other threats to human and planetary health,” said Inger Andersen, Executive Director of the United Nations Environment Programme.

“Patagonia shows that sustainability makes economic sense and the company’s success reveals a desire among consumers to see businesses take a leading role in tackling climate change and environmental degradation. Patagonia shows that it can be done, and done well,” she said.

The need for radical global action on climate change will be highlighted at a pivotal United Nations Climate Action Summit in New York on 23 September. UN Secretary-General António Guterres has urged world leaders, businesses and civil society to come to the summit with concrete ideas of how they will cut emissions by 45 per cent in the next decade and achieve net zero emissions by 2050, in line with the Paris Climate Agreement and the Sustainable Development Goals.

Businesses have a critical role to play as reducing emissions goes hand-in-hand with creating jobs, building more livable cities, and improving health and prosperity for all, making sure no one is left behind.

“We are honored to receive this award from the United Nations and we hope it will inspire other companies by showing that you can have a prosperous business and also do good in the world. In fact, that is the only way to ensure your own survival and the survival of the planet,” said Rose Marcario, Chief Executive Officer of Patagonia.

“I have been encouraged to see many businesses recognize that capitalism needs to evolve if we are to have a healthy planet. And I am even more encouraged and inspired by the young activists calling for climate action. We all need to step up and invest in solutions and fight the fight of our lives to save our home planet.” she said.

In 2018, Patagonia said it would give an additional $10 million from the 2017 federal tax cut to grassroots groups defending the planet’s air, water and land, as well as those involved in the regenerative organic agriculture movement — a holistic approach to growing crops that prioritizes soil health and aims to sequester carbon from the atmosphere.

Champions of the Earth is the United Nations’ flagship global environmental award. It was established by the UN Environment Programme in 2005 to celebrate outstanding figures whose actions have had a transformative positive impact on the environment. From world leaders to environmental defenders and technology inventors, the awards recognize trailblazers who are working to protect our planet for the next generation.

Patagonia is among five winners this year. The other categories are policy leadership; inspiration and action; and science and innovation. The 2019 laureates will be honored at a gala ceremony in New York on 26 September during the 74th UN General Assembly. Also honored at the event will be seven environmental trailblazers between the ages of 18 and 30, who will take home the coveted Young Champions of the Earth prize.

Great to see the press in Amsterdam picking up on our new office opening! For any enquiries relating to our work in Amsterdam and the Benelux region contact me directly! iamsterdam.com/en/business/ne… #Amsterdam #sustainability #recruitment #mvo