The climate ambitions of European integrated oil and gas majors have strengthened markedly in the last six months, with Total, Shell, BP, Repsol and Eni all having made commitments to significantly reduce the carbon intensity of the energy they supply. New analysis from the Transition Pathway Initiative (TPI) – an investor initiative backed by over $19 trillion of global capital – shows that four oil and gas majors – Shell, Eni, Total, Repsol – are now aligned with the emissions reductions pledged by the signatories to the Paris Agreement. BP and OMV are now the only European companies who fail to align with the Paris pledges. However, despite these commitments, none of the companies are aligned yet with ‘net zero’ or 1.5° C pathways.

TPI calculates that the average European oil and gas company would need to cut its emissions intensity by over 70% between 2018 and 2050 to align with a 2°C climate scenario by 2050, while a genuine net zero strategy would require a 100% cut in absolute emissions. Even the most ambitious new targets fall far short of this. 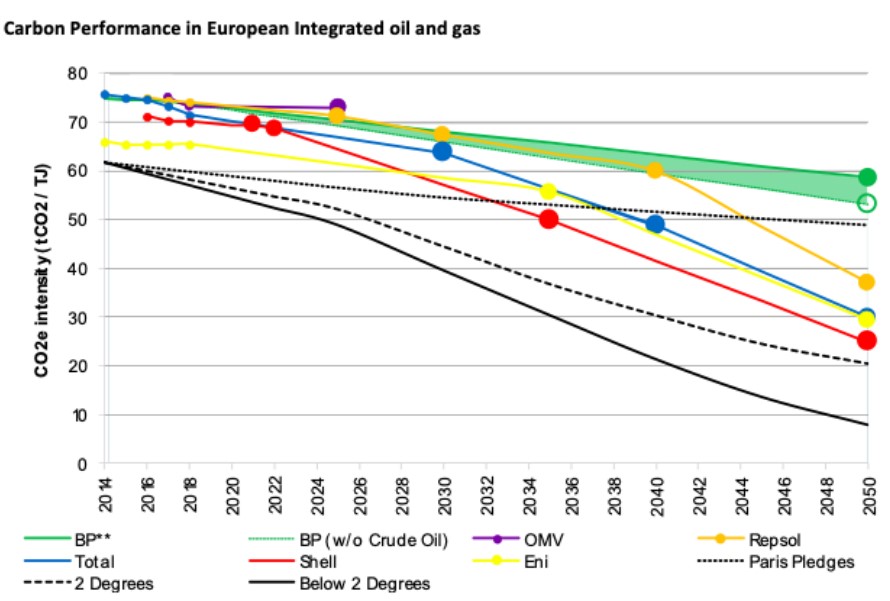 Adam Matthews, Co-Chair of TPI, and Director of Ethics and Engagement for the Church of England Pensions Board, said: “The European integrated oil and gas sector is changing rapidly. Three years ago, no company had set targets to reduce the carbon intensity of the energy they supply. Today all six oil and gas majors assessed by TPI have set such targets and we have seen significant progress in the past months, with companies engaging with the concept of net zero, adopting longer-term perspectives and setting more ambitious goals to accelerate the lowcarbon transition. “TPI’s analysis underlines that these commitments are not all equal in ambition or in scope and deeper decarbonisation is needed to align with a 1.5°C or even a 2°C scenario. Shell and Eni are leaders and Shell have introduced a new concept of not selling energy to customers that are not also aligned to net zero pathways in key sectors such as aviation, shipping and freight. This warrants further analysis to quantify the emissions reductions of such an approach.”

“Investor engagement, through initiatives such as CA100+, will be critical in ensuring current momentum toward net zero is sustained. Based on TPI’s analysis investors can now determine a net zero standard for the oil and gas sector that includes absolute emissions and emissions intensity targets covering all downstream, Scope 3 emissions. Critically, these targets must apply to all energy products sold, including those acquired from third parties.”

Highlights from TPI’s research include:

Shell’s goal to cut its emissions intensity by 65% by 2050 is the most ambitious in the sector and the closest to alignment with a 2°C scenario. But TPI says that “Shell’s claim that it will be aligned with a 1.5°C climate scenario is not consistent with our analysis.” Shell’s announcement that it will work with the supply chain in hard-to-decarbonise sectors such as aviation and heavy duty freight transport is innovative, but further details will be needed to understand how the benefits of this approach can be quantified.

Eni is the only company to have set an absolute target, aiming to reduce emissions (including Scope 3) by 80% by 2050. Its ambition to reduce emissions intensity by 55% across all energy products is particularly strong, given its carbon intensity is already only 65.3 tCO2/TJ, 10% lower than its peers. Eni also discloses the expected contribution of carbon capture and storage plus offsets (40 MtCO2e per year), making theirs the most comprehensive strategic response.

Total has increased the ambition of their 2040 emissions intensity reduction target and added a new 2050 target of 60%. However, this alone would not deliver Total’s ambition to “achieve net zero across all its production and energy products used by its customers in Europe by 2050”. TPI says that “Most of the initiatives needed to deliver on this ambition will take place outside of the company… Total has not provided additional disclosure at this stage on how it intends to reach its ambition.” Total has cut intensity from 75.6 tCO2e/TJ in 2014 to 71.4 tCO2e/TJ in 2018 through a combination of expansion
of LNG and gas, disclosure of biofuels, falling operational intensity plus increased electricity sales. However TPI calculates that its absolute emissions rose 8% over the same period.

BP has set a target to cut the emissions intensity of sold products, including Scope 3, by 50% by 2050. This is a substantial shift as the company’s previous targets only extended to 2025 and excluded Scope 3 emissions. However its plans to reduce the carbon intensity of marketing sales by 50% by 2050 exclude both Trading/Supply and Crude Oil sales. Together these product categories account for 11mTJ or 59% of energy assessed by TPI and over 800 MtCO2e emissions annually. As such, BP’s targets are less ambitious than those from Shell, Total and Eni. They fail to align with the Paris pledges and are far from alignment with 2°C or net zero.

TPI notes that BP, OMV, Repsol, Shell and Total have all indicated they intend to further update investors on their climate ambitions during 2020. To ensure further progress within the sector and to establish an oil and gas standard that enables it to meet net zero it will be essential for these companies to:
• Provide standardised and comparable disclosures
• Strengthen emissions reduction commitments
• Broaden the scope of commitments to include all energy products
• Provide greater clarity on the contribution carbon capture and storage (CCS) and/or offsets make to overall corporate goals
• Set both intensity and absolute emissions targets
• Provide better disclosure on the contribution low carbon energy sources will make to overall corporate goals
• Align short term targets and executive remuneration with long term climate commitments
• Establish a sectoral decarbonisation plan

Outside Europe oil and gas companies need to:
• Set Scope 3 emissions targets
• Strengthen their governance and management of climate change