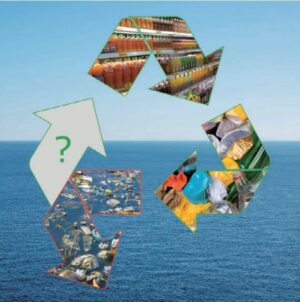 The European Academies of Science (EASAC) warn that current efforts to resolve the plastics crisis are ineffective and misleading. Policymakers and industry must address conflicts in the whole system, from production to end-of-life. “Reducing the leakage of millions of tons of plastic waste into the marine, terrestrial and freshwater environments is incompatible with banking on continued growth in the use of plastics”, says EASAC’s Prof. Michael Norton. EASAC’s latest report “Packaging Plastics in a Circular Economy” shows that fundamental and systemic reforms are required along the whole value chain, in order to slow and reverse damage to the environment, biodiversity and ultimately risks to human health.

Plastics are literally everywhere. Since the 1960’s global plastic production has increased from 1.5 million to almost 400 million tons per year. “Macro and microplastics are widespread on land, in the seas and are even found in the air. For many species, plastics are deadly, through entanglement and ingestion, while microplastics are transmitted throughout the food chain. In the history of mankind, the 21st century might actually be remembered as the ‘plastics age’”, says Norton.

“We do not question the essential role and benefits of plastics in our way of life. But the warning of our report is not a dystopia of environmental activists. It’s science”, Norton continues. The report makes clear that voluntary mechanisms and market mechanisms are insufficient to address the problem. Norton: “European legislators should adopt rules and incentives to speed up the move towards a Circular Plastic Waste Economy. We have to reuse plastic goods and packaging, drastically improve our recycling and above all see that no waste is leaked into the environment.”

The Academies’ report makes clear that banking on growth is not an option, not least because switching to many so-called “bio”-materials cannot be justified on resource or environmental grounds either. Says Norton: “They can mislead consumers by creating a false image of sustainability and thereby risk prolonging today’s throw-away mentality.”

This is the first time ever that the leading scientists from the National Academies of Science of 28 European countries have joined efforts in taking an in-depth look at the whole plastics value chain. Based on their findings, EASAC’s scientists issue seven recommendations to EU policymakers how to transform the system.