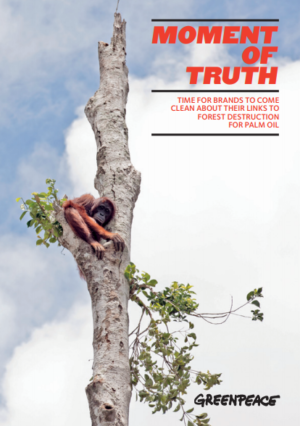 Eight major household brands such as PZ Cussons, Johnson & Johnson and Kraft Heinz are refusing to say where their palm oil comes from, despite promising to stop buying from companies that destroy rainforests. Eight others, such as Nestlé and Unilever, have made their palm oil supply chains more transparent. This comes as a new report by Greenpeace International, Moment of Truth, finds brands are not on track to meet their commitments to a clean palm oil supply chain by 2020. 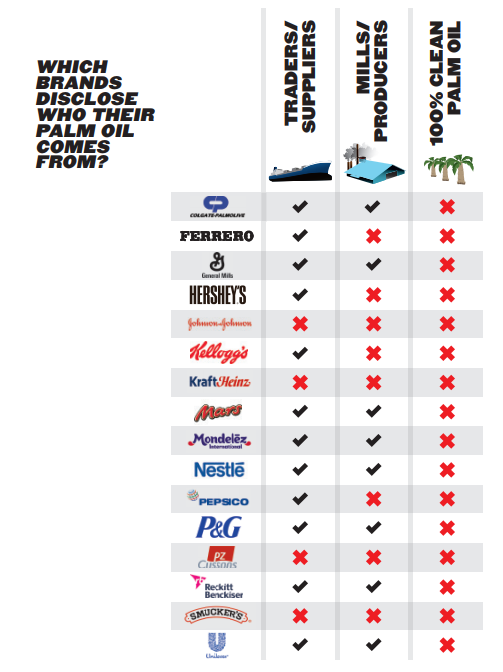 “Brands have repeatedly promised to end deforestation for palm oil by 2020. With less than two years to go they are way off track. Some, such as Nestlé and Unilever, have at least come clean about that. Others, including PZ Cussons, Johnson & Johnson and Kraft Heinz, are still keeping customers in the dark,” said Kiki Taufik, Global Head of the Indonesian forests campaign at Greenpeace Southeast Asia.

In 2010, consumer brands pledged to eliminate deforestation from palm oil and other key commodities by 2020. There is growing evidence that they will fail to meet this deadline with dangerous consequences for the climate.

In January 2018, Greenpeace International challenged 16 leading brands to disclose their palm oil suppliers, along with the mills that produced the palm oil they used. This would show whether brands continue to source from forest destroyers. Eight brands have now disclosed this information. Eight refused to say where their palm oil comes from.

Alarmingly, the destruction of Indonesia’s rainforests for palm oil shows no sign of slowing down. In case after case, NGOs have linked major brands to palm oil companies that destroy rainforests and exploit people.

“Despite corporate commitments to reform this dirty industry, palm oil remains a high-risk commodity. Brands need to come clean about where their palm oil comes from and cut off growers that refuse to change their destructive ways,” said Kiki.

Greenpeace analysis of official government data suggests that Indonesia has lost 24 million hectares of rainforest between 1990 and 2015. In the last three years to 2015, 146 football fields of rainforest were destroyed every hour.

Indonesia has more threatened and endangered species than any other country, largely due to the destruction of their habitats. The Bornean orangutan population has decreased by half since 1999 with over 100,000 individuals lost in the past 16 years. In 2017, a new species of orangutan was discovered in Sumatra, but it is already endangered.

Congrats @ING @KPN @Philips @BAMGroep_NL @signify and @Unilever with the listing on the @CDP 'A-List' for leadership on corporate transparency and action on #ClimateChange duurzaam-ondernemen.nl/bt-dan… #mvo #duurzaam pic.twitter.com/BK63oqYFPL

i Really Need to go on a Water Clense 💦 #MVO