Despite headline-grabbing climate announcements by a number of European oil & gas companies this year, no fossil fuel energy major has yet set an emissions target in line with limiting climate change to 2°C, according to new research by the $22 trillion-backed Transition Pathway Initiative (TPI). TPI assessed 59 oil & gas and coal mining companies on carbon performance, finding that just seven companies (12%) have set emissions targets in line with the pledges made by national governments as part of the Paris Agreement in 2015: Glencore, Anglo American, Shell, Repsol, Total, Eni and Equinor (all European).

Moreover, those pledges are widely regarded as insufficient to avert dangerous climate change (leaving the world on track for 3.2°C of warming according to UNEP).
When judging companies’ emissions pathways against the more ambitious benchmark of limiting climate change to 2°C or below, none of the 59 fossil fuel companies were found to be aligned, although three oil and gas companies are approaching a 2°C pathway (Shell, Total & Eni) but still need further measures to be assessed to align with this benchmark.

Transition Pathway Initiative co-chair Adam Matthews said: “Investors have witnessed a flurry of significant climate announcements by fossil fuel majors this year, so it is striking this independent research still shows those commitments do not yet align with limiting climate change to 2°C. “There has been some movement, with seven European companies now aligned with the Paris pledges, and Shell, Total and Eni getting close to meeting the 2°C benchmark. But US fossil fuel giants have yet to take meaningful action to reduce their emissions and the gap with their European peers is stark.” 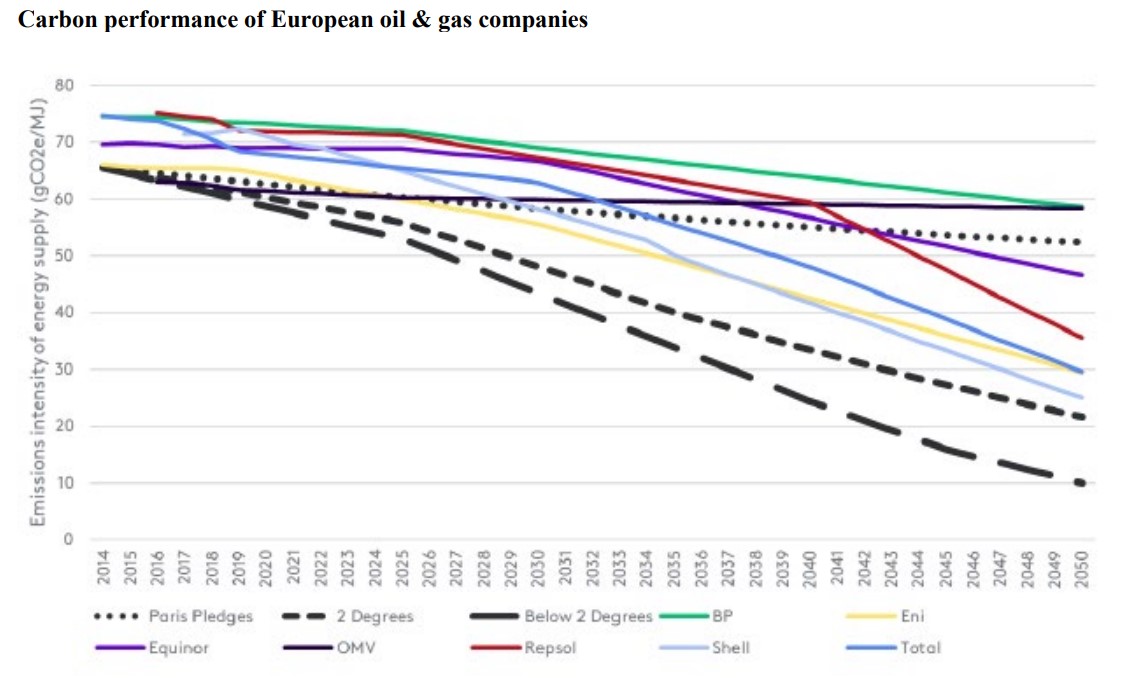 TPI also assessed 66 electric utility companies, finding that 39 (59%) were aligned with the Paris pledges, while 22 (33%) were aligned with the most ambitious ‘below 2°C’ benchmark. Report author Professor Simon Dietz explained the divergence between sectors: “The electricity sector is heavily regulated with regards to its emissions in some regions such as the EU and this likely explains some of the results we see. More broadly, the technologies needed for decarbonising electricity production are already there and often competitive on cost with fossil fuels, so the core business model is not under threat. For oil & gas companies, the route to Paris alignment is much more of a challenge to their basic reason for being. Some companies have started grappling with this challenge, but none have met it yet.”

TPI also assessed companies’ ‘Management Quality’ or governance of climate risks. TPI measures management quality on a scale from Level 0 (Unaware) to Level 4 (Strategic Assessment), with the average score for energy companies coming in at 2.7 – just 0.1 higher than last year’s result. The research showed that 94% of energy companies now have a policy commitment to act on climate change, but fewer take the more advanced management quality steps. For example, just 9% of companies ensure consistency between their climate change policies and the positions taken by lobbying groups of which they are a member.

Twenty companies have improved their score since last year. For example, CMS Energy and Dominion Energy have moved up by having their operational GHG emissions verified for the first time. However, 13 companies have moved down a level. For example, Eneos, Neste and Suncor Energy moved down as a result of no longer disclosing their involvement in trade associations that are active in climate lobbying.

Bill Hartnett, Stewardship Director, ESG Investment, Aberdeen Standard Investments, said: “Aberdeen Standard Investments is proud to be a research funding partner for the Transition Pathway Initiative (TPI) as it continues its ground-breaking research mapping the companies’ preparedness and progress in the transition to a low carbon economy. “TPI’s latest report on global energy companies shows some encouraging signs of progress, particularly with more electric utilities and European oil and gas companies making ‘net zero’ commitments to align their strategies with the goals of the Paris Agreement. The key challenge is to turn these net zero pledges into actions and reflect ambitions in investment plans. “The report shows that the great majority of companies in these critical transition sectors are far from being ‘Paris aligned’ and that the coal sector is particularly challenged. High management quality scores are not always linked to adequate climate ambitions. This TPI research provides us with an important investment and stewardship tool to develop strategies to address these risks on behalf of our clients”.

Carola van Lamoen, Head of Robeco’s Sustainable Investing Center of Expertise said: “The decarbonization of the energy power is critical in achieving the ambition of limiting global warming to well-below 2°C. We are encouraged by TPI’s finding that a growing number of companies are aligned with a low carbon scenario. Over the past year we have seen momentum particularly in the oil and gas industry, partly driven by investor engagement. Still, with only 37% of energy companies aligned with at least the Paris Pledges, and 18% aligned with the most ambitious Below 2°C benchmark in 2050, there clearly remains a long way to go. Robeco is committed to continuing our engagement efforts to drive corporate climate action.”