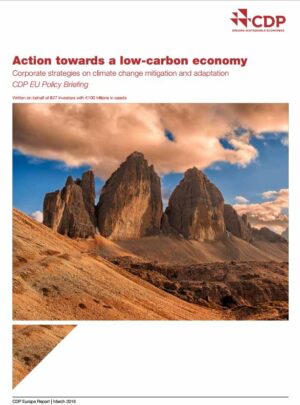 According to the EU policy report on corporate strategies on climate change mitigation and adaptation published today by CDP, companies are considering climate change a risk as well as an opportunity in an equal way.

On the eve of the official signature of the Paris Agreement, concluded at the COP21 UN climate conference last December, a new report reveals that European corporate ambition to meet climate targets is growing fast although corporate efforts are not always channeled in the most effective way. More action and science based emission reduction target setting is needed to be more impactful as in many countries emissions are not decreasing or are even increasing. The report’s results are based on the latest environmental data disclosed by European companies representing 63% of EU market capitalization.

European companies are also showing great climate leadership as 99% is assigning adaptation to climate change to board level responsibility as it’s considered to be a crucial issue for business stability.

Caterina Salb, co-author of the report and consultant for Energy Policies at Ecofys says “Evidence from the companies themselves demonstrates that climate resilience and adaptation have reached the board room. Adaptation is not only about risk management – it is about business leaders anticipating future opportunities to gain a competitive edge worldwide“.

Further evidence shows that companies see temperature extremes as a serious challenge to their business, but at the same time they see great potential for new products and markets arising from a changing climate. The report also shows that policy uncertainty is considered a risk, while international agreements are seen as an opportunity that offer a level playing field for companies to operate in.

The findings suggest that strong international agreements and clear regulation, like the Paris Agreement, have the potential to contribute to driving business in the transformation towards a low-carbon economy.

The report includes detailed recommendations for companies, policy makers and cities and is free to download here.