The companies analyzed have annual emissions equivalent to three quarters of the EU total and represent approximately 76% of European market capitalization.

The biggest areas of new investment were in R&D for electric vehicle technologies, with €43 billion set aside, and capital investments in renewable energy (€16 billion), energy grid infrastructure (€15 billion) and demand-side response programs for intelligent energy use (€8 billion). 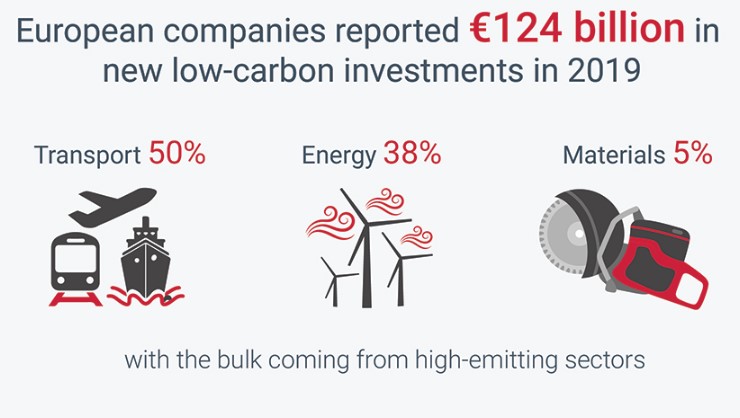 However, the report estimates that companies would need to double the low carbon share of capital expenditure (CAPEX) from 12% to 25% per year to be consistent with a net-zero emissions pathway by 2050, which is needed for the EU’s new climate neutrality target.

The new report is presented yesterday at the CDP Europe Awards, held at the French Ministry of Foreign Affairs in Paris under the High Patronage of Mr Emmanuel Macron, President of the French Republic.

The study finds a clear business case for making new low carbon investments. Overall, European companies expect to avoid 2.4 gigatons of emissions – more than the annual emissions of the UK, Germany, France, Italy and Poland combined – while contributing over €40 billion to their bottom line.

European companies also identify €1.22 trillion in new low carbon business opportunities, such as through higher demand for electric vehicles and green infrastructure. The value of these opportunities is more than six times the investment cost of €192 billion.

Current low carbon investment is concentrated in a few key sectors, with over €9 out of every €10 reported spent by transport, energy and materials companies.

Companies in these sectors account for over 80% of the analysis group’s direct emissions, meaning that their investments have a major impact on overall European emissions and the likelihood of the EU achieving its climate-neutrality target.

In the transport sector, where meeting EU targets will require a rapid shift towards electrification, €43 billion was reported for new R&D investments, primarily to develop electric vehicles and autonomous technology.

But companies in the materials sector, which includes heavy emitting industries like cement, chemicals, steel and mining, reported just 5% of the total low carbon investment in 2019, though they account for nearly 40% of direct emissions.

These industries need to develop breakthrough technologies if they are to decarbonize in line with the EU’s ambitions, but investment is low. Less than 1% of the total low carbon investment in Europe was used for developing carbon, capture, utilization and storage (CCUS) and hydrogen technology, which can be used as a fossil fuel replacement in heavy industries.

Steven Tebbe, Managing Director of CDP Europe, commented: “European companies are making significant investments in transformational low carbon technologies that can help the EU deliver its climate neutrality target by 2050. Across many types of investment, the business case for transitioning businesses onto a low carbon pathway is clear, and the opportunities vast. But overall current investment levels are still short of putting European firms on track for net zero emissions. For industries where decarbonization is more challenging, there is a serious need for financial markets and policymakers to create better conditions for low carbon investment and deliver stronger incentives to drive investment into breakthrough technologies, where capital expenditure is often high and returns long-term.”

The full Doubling Down report is available for download here