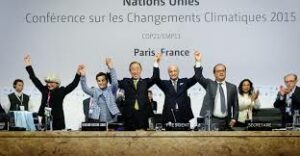 ING today joins more than 70 CEOs, companies and union leaders in the United States to urge the need for climate action and emphasise the importance of the Paris Agreement. The statement also calls on the US government to remain in the Paris Agreement. Today, as global policymakers begin gathering in Madrid for the UN’s annual climate summit, these companies and labour unions (which represent 12.5 million US workers) agree that we’re facing a climate emergency and that we can no longer afford to not face it together.

Four years ago, governments signed an ambitious global climate agreement in Paris. Since then companies, unions and civil society groups have rallied behind it. Last month, the US began formally withdrawing from the Paris Agreement after stating its intention to do so in 2017. We join together in an urge to the US government to remain in the Paris Agreement.

This is the result of a first-of-its-kind alliance: companies and labor unions are uniting to underline the importance of a stable transition to a low-carbon economy. Not only in order to grasp the economic opportunities it presents, but to ultimately benefit workers as well. Because an orderly and fair transition is better for workers than if governments and companies postpone making any changes and then have to scramble to catch up when time starts running out.

The economic opportunity is clear. As of 2018, clean energy employed 3.3 million Americans—three times the number of workers employed by fossil fuels—and employers estimate a 6% increase in these jobs through 2019. Estimates also indicate that the shift to a low-carbon economy marks a US $26 trillion global growth opportunity.

The low-carbon transition requires a policy framework that supports long-term investment and planning. Financial institutions worldwide are setting Paris-aligned portfolio goals. For banks, the UN-backed Principles for Responsible Banking and the Collective Commitment to Climate Action provide guidance. More than 3,800 American businesses, states, cities, representing nearly 70% of the country’s gross domestic product, are committed to the promise of Paris.

ING believes in a transition to a low-carbon economy and is pursuing this through our Terra approach, which is our strategy to steer our loan book in line with the well-below two-degree goal of the Paris Agreement. That transition also entails an orderly and fair transition of the workforce. Supporting today’s statement was a simple decision.