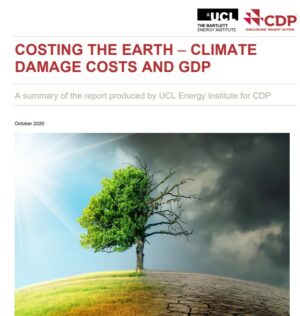 A first-of-its-kind report released today by CDP, a non-profit which runs the global environmental disclosure platform, and University College London (UCL) has modelled the mean damage costs of ‘business as usual’ action on climate change at $5.4 trillion a year by 2070 and $31 trillion a year by 2200. Accounting for these damages will lead to a 10% reduction in GDP growth rate by 2050 and 25% by 2100.

Although there is growing recognition that climate change could have a high impact on long term GDP growth, an important measure of economic health and well-being, attempts to embed climate-related risks into mainstream macro-economic indicators have been limited. This is partly because the impact of climate change on GDP is difficult to capture as there are regional winners and losers and large uncertainties in the modelling approach.

This report uses three comprehensive models to capture climate change impacts in two central long-term scenarios – a 2°C scenario, which is aligned to the Paris Agreement ambitions, and a ‘Reference Scenario’ based on a ‘business as usual’ pathway that implies a temperature rise of 4.4° C by the end of this century.

The study clearly shows the high costs of damages from both economic and non-economic costs*, including environmental damage, in a scenario where no action is taken to cut GHG emissions. This compares to a 2°C scenario where policy action results in a fraction of the costs of damage. This will involve investing in mitigation action but will result in damages peaking in 2070 at a much lower level.

Damage costs in the 2°C scenario peaks at US$1.8 trillion by 2070 and plateaus after this, whereas the ‘business as usual’ scenario shows costs running at triple this level (US$5.4 trillion) and rising steeply beyond 2100 (reaching above US$31 trillion a year toward year 2200).

The report, commissioned by CDP, highlights the importance of capturing climate impacts on GDP using a granular approach, and to understand regional and sectoral differences with some markets and regions more susceptible to climate related risks. A granular approach to modelling agricultural impacts sees significant negative impacts in regions including India and Africa while temperate regions should see net benefits.

Physical impacts from climate change such as heat stress can also impact GDP. For instance, impacts on the productivity of the industrial and service sectors will result in mean global GDP falling in both central scenarios.

How our energy system needs to be adapted is also impacted – a scenario resulting in very high damage costs sees an acceleration in the pace of electrification using renewable sources and high take up of carbon capture technologies.

Carole Ferguson, Head of Investor Research at CDP, commented: “The impact of climate change on GDP varies significantly between regions, with developing economies such as India suffering the most. Given the potential scale of damage costs and the implications for disruption in the global system, economic actors cannot just wait for the right regulatory policies to be put into place. Policy makers, corporates and the financial system, which will be impacted, should be proactive in investing in mitigation and adaptation to avoid these high damage costs.”

Dr Gabrial Anandarajah, Associate Professor from the UCL Energy Institute, commented: “In evaluating the impacts of climate change on GDP, we have attempted to overcome the limitations of a single model by using three different models developed at the UCL Energy Institute and the UCL Institute for Sustainable Resources. Three multi-region global models have been used to estimate economic and non-economic costs of climate change on various economic sectors”.