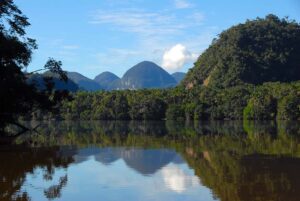 The world’s first retail platform that connects consumers to their own carbon footprint has been launched in London by non-profit ogranisation The Poseidon Foundation (“Poseidon”). Poseidon’s platform uses blockchain technology to integrate carbon markets into transactions at the point-of-sale, giving retailers and their customers the opportunity to support forestry conservation projects around the world when they buy and sell everyday items, and in turn support action on climate change. The retail platform launched on 1st May, and a pilot is currently underway at Ben & Jerry’s newest ice cream Scoop Shop in Wardour Street, London.

For every scoop of ice cream sold the values-led ice cream company is contributing towards carbon credits from a forest conservation project in Peru, and is offering their customers the opportunity to join them in taking action at the point of sale, using blockchain technology. Ben & Jerry’s has been vocal for many years on the issue of climate justice, including their global Save our Swirled campaign ahead of the Paris COP in 2015 and they have taken a number of steps within their own business to reduce their emissions, including a self-imposed carbon tax.

Speaking about the launch of the pilot, Laszlo Giricz, Founder and CEO of Poseidon said:

“We are thrilled to see our pilot with Ben & Jerry’s fully operational, giving consumers for the first time the opportunity to rebalance their own carbon footprint – and rebalance the carbon concentration in the atmosphere in the process. While this is just one small pilot, the technology is now proven and can be fully scaled and integrated, giving everyone the opportunity to understand their own carbon impact and take action. In just three weeks, we have already protected over 1,000 trees via the London store, equivalent to an area the size of 77 tennis courts, which is very encouraging and shows the potential for the platform to drive behaviour change once widely adopted.”

“We have got a long way to go within our own business to reduce our reliance on fossil fuels but we have also made some big commitments and want to be transparent about our impact. At the same time, we want to use every part of our business to support a transition to a low carbon economy, including putting an internal price on carbon and setting ourselves ambitious targets to reduce our absolute carbon emissions by 80% by 2020. We are excited by the opportunity Poseidon Foundation’s new technology brings as an approach that connects fans to climate action.”

All of the carbon credits on the Poseidon Platform will be sourced from Ecosphere+, a B Corp. As part of the Althelia Climate Fund, Ecosphere+ has direct access to the largest portfolio of forest conservation projects in the world. The first project supported by users of the Poseidon platform, the Cordillera Azul National Park, sits at the intersection of the Andes mountain range and the Amazon basin in Peru and is home to around 6,000 plant species, 11 endangered large mammals and numerous indigenous populations.