Schroders has today announced the launch of its Sustainable European Cities Index(1) where Amsterdam claimed the coveted top spot, closely followed by London and Paris. The leading scores are underpinned by the cities’ robust response to tackling climate change.

The proprietary Schroders Sustainable Cities Index is based on sustainability profiles of European cities with population in excess of one million people. It highlights the cities that are delivering on their environmental targets in accordance to the United Nations’ Sustainable Development Goals. 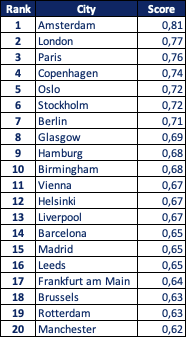 Hugo Machin, Portfolio Manager and Co-Head of Global Cities, Schroders, commented: “Both Amsterdam and Paris scored well on their ambitious 2050 targets for 100% of energy to come from renewable sources. In this category, London lagged somewhat with a target of 15% by 2030. This was lower than the EU’s renewable energy directive, which aims for 27% of final energy consumption from renewables by 2030 and which was used as an indication of best practice to guide the scoring in this category.”

“The Index is important because it ranks the European cities that will provide their inhabitants with a high quality of life, whilst minimising environmental impact.

“This is in accordance with the United Nations’ Sustainable Development Goal 11. The index shows which cities are implementing policies which will help the transformation to a low carbon future. It also shows areas where elected representatives fall short in minimising environmental impact.”

UK regional city Leeds came in at 16th place on the index, ahead of some of its bigger European peers, such as Brussels which was ranked 18th. Leeds scored well across all policy categories with a comprehensive Net Zero Carbon Roadmap and a clean air strategy for the city and also has a comprehensive waste reduction strategy.

(1) The Schroders Sustainable Cities Index has been constructed using research of city-level policies. The research was reliant on the level of disclosure provided by city councils, and therefore, there may be policies in place that Schroders research team is not aware of.