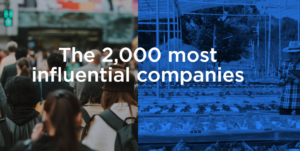 The World Benchmarking Alliance (WBA) has today revealed the SDG2000, a list of the companies that have the most influence over our ability to move to a more sustainable future. The list – comprised of companies which collectively make up half of the entire global economy and are responsible for $43trillion in revenue – is part of WBA’s mission to measure the private sector’s impact and efforts in sustainability with one global accountability mechanism. There are 48 companies on the list with the headquarters in The Netherlands.

With the companies now identified, WBA will rank those listed on their performance and impact on the SDGs – ensuring the results and findings are freely and publicly available to all. Through this transparency the rankings will hold businesses to account by highlighting peer to peer performance. This will inspire leaders to make the changes necessary for real impact and act as an accountability mechanism for those who are falling behind.

Pauliina Murphy, Director at WBA, said: “Companies must compete globally, and to be successful, they need to embed the right sustainability practices at the very core. There is no greater urgency than tackling inequality, climate change and biodiversity loss. These SDG2000 companies have the potential to drive forward systems change. Our benchmarks hold a mirror to companies on their performance, which encourages a race to the top and hold laggards to account.”

The range of industries within the SDG2000 shows that no one single group can be held up as the one to change, a pan-sectoral effort is needed. Listed, private and state–owned companies identified include Apple, Facebook, Netflix, Tesla, Coca Cola, Tencent and Starbucks, demonstrating the scale of effort needed across industries. Taking impact as the key differentiator, the list also reveals the influence wielded by companies and groups like Saudi Aramaco, Africell and Safaricom in Africa, Cargil, Bancocolombia and Temasek whose global footprint and control over segments of production and/or service provision make
them key players in future sustainability.

Richard Hardyment, Research Director at WBA, said; “For the first time, we have identified the who – the most influential companies when it comes to sustainable development. As investors, employees and consumers demand more from business, WBA benchmarks will set out whether these keystone companies are performing.”