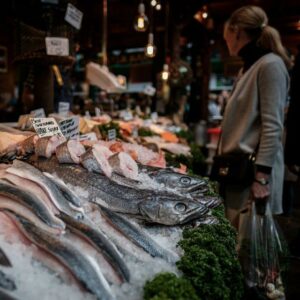 The World Benchmarking Alliance (WBA) today launched the Seafood Stewardship Index ranking 30 of the most influential seafood companies in the world on their commitments, transparency and performance to meet the United Nations’ (UN) Sustainable Development Goals (SDGs). The Dutch based companies Nutreco and Parlevliet & Van der Plas ranks in the top 10.

The Benchmark is the first detailed ranking of these keystone companies based on their sustainability efforts. It analyses where the largest seafood companies need to take bold action in the next decade to meet the UN SDG’s agenda to accelerate the transition to a more sustainable future for all.

Overall, WBA found leading practices amongst several of the seafood companies with strong sustainability strategies, sourcing and human rights policies. There are also good examples of how companies manage the environmental impacts of their operations and their work on sustainable fisheries and aquaculture initiatives.

However, the future long-term sustainability of the seafood industry is being hampered by a lack of oversight of operations and supply chains impacting for example, measures to eliminate illegal, unreported and unregulated (IUU) fishing, protect ecosystems and respecting human rights and working conditions. The performance also indicates that the industry overall needs to move into a phase of active implementation, particularly on how it addresses its impact on ecosystems, human rights and working conditions and local communities with room for considerable improvement.

The seafood industry produces one of the world’s most valuable, globally traded food commodities and is an important nutrient source to around three billion people - especially those in developing countries. The seafood industry also employs millions worldwide with more than hundreds of millions of people depending on it for their livelihoods.

“The high level of engagement by the majority of the companies has facilitated the development of this ranking with deep insights into the seafood industry. Across the ranking there are examples of best practice but overall the Seafood industry needs to act boldly to meet the UN SDG agenda. The most influential seafood companies globally can make significant progress and they need to quickly. The hope is that this benchmark will drive even greater transparency and encourage peer to peer learning to reach the ultimate end goal – more sustainable oceans for us all.” – Rik Beukers, Lead Seafood Stewardship Index at WBA

“The big take away from this ranking is that there is now a broad commitment and consensus around sustainability among those companies most subjected to domestic and international scrutiny in the past on issues like human rights, overfishing and pollution. With just one decade left to achieve the SDGs, now is the time for the entire seafood industry to step up. Transforming the food system requires greater transparency and bold action from the Seafood industry. Our oceans and the people directly depending on them rely on getting this right and fast. That starts with some of the most influential global seafood companies getting a better grip on their operations.” – Gerbrand Haverkamp, Executive Director at WBA

The WBA Seafood Stewardship Index ranks the 30 most influential seafood companies based on their efforts towards achieving the UN SDGs, the world’s agenda for working towards a sustainable future. It presents an overall ranking based on the weighted sum of the results in five measurement areas. These areas reflect where key industry stakeholders expect corporate action and where seafood companies could have the most impact. For each of the five measurement area’s WBA looked at the public disclosures, commitments and performance of the companies in the benchmark. The five areas are:

Overall, Thai Union Group tops the WBA Seafood Stewardship Index 2019 ranking. The company, known for its John West and Chicken of the Sea brands, stands out with robust environmental and social commitments, targets and activities on which it reports publicly.

In second and third in the ranking respectively, are Mowi, a Norwegian integrated salmon farming company formerly known as Marine Harvest, and Thai-based conglomerate Charoen Pokphand Foods, both demonstrating strengths across most measurement areas. Indeed Mowi  scored highest on transparency with a strong sustainability strategy detailing how it manages the impacts of its farming operations. Charoen Pokphand Foods, one of the largest shrimp producers in the world, demonstrates strong human rights commitments and group-level sustainability strategies and targets.

The remainder of the top ten is made up of companies based in developed countries, predominantly Europe. Rank 11 to 20 shows a group of companies based in different geographies, including Europe, Asia and North America. Places 21 to 30 are dominated by Japanese (four) and US-based (three) companies. Half of the companies in this section are privately owned, generally displaying less public disclosure of company policies and operations. 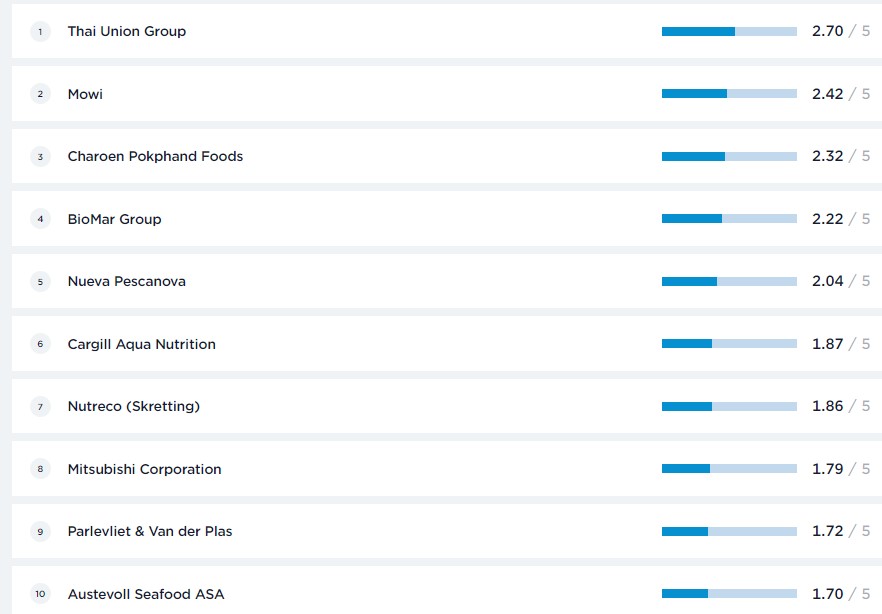