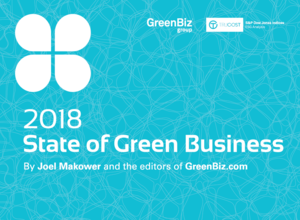 “Two degrees and the SDGs.” That’s the new sustainable business mantra. It rhymes. You can almost dance to it.

The following is adapted from State of Green Business 2018, published today by GreenBiz in partnership with Trucost.

The double-barrel impact of the Paris climate agreement and the United Nations Sustainable Development Goals, both enacted in 2015, is finally being felt as companies begin to align their sustainability goals and, ultimately, their operations with these global commitments. And even though the United States government remains on the sidelines of both efforts, the private sector — allied with states, cities and other nations — is marching forward. If not in lockstep, at least in the same general direction.

Indeed, company commitments and achievements continue, unbuffeted by the political winds. Leadership companies such as Walmart and Apple continue to raise the bar — a commitment to remove a billion tons of greenhouse gases from the atmosphere, in the case of the retail titan, and a pledge to make mobile phones entirely from recycled materials, for the iconic tech company. Newer and smaller firms are making moves, too, ramping up renewable energy purchases and taking on other green initiatives once seen as purely the domain of the world’s biggest brands.

Download the State of Green Business 2018 (pdf, after requesting)

that Lawn Odell Reigh Topic is Not That Deep... Yall Giving People the Free Publicity & Dont Even Know it #MVO

@onlymaryjanee Get a Stool/Chair.. cuz it cud Take a While...Also, Have a Mirror in the front of U & the Back (Hella Great for seein the Back) #MVO

Not All Hair Dressers Are Created Equally #EnoughSaid #MVO