We know the world’s in trouble. The right leadership can get us out

Have you noticed how many of this year’s New Year lookaheads say the same thing? Numerous reports and articles aimed at business, all predicting unpredictability. We’re being warned of geopolitical tension, economic pressure, reduced living standards, increased cyber risk, climate chaos and polarised politics. Nothing wrong with these analyses per se: call it permacrisis or polycrisis, our world is changing and we need to continually adapt. But we also need to be careful of admiring the problem or stating the obvious, as many of these predictions do. Most responsible boardrooms are already trying to navigate these choppier waters.

Unfortunately, the thing that still isn’t being given enough attention is actually what we need most of in the year ahead: it’s courageous leadership. Because when it comes to humanity’s biggest shared challenges – and none more burning than climate change and inequality – we’re being outpaced by our problems, which are growing faster than we’re applying solutions. Even where governments and business are starting to step up and do more, the nature of these challenges, which are exponential in the case of climate change, means humanity is still falling behind. In other words, the gap between our efforts and our problems is growing.

In this scenario, even though we already have much of the technology and knowledge needed to address the issues, and even though the money could in theory be found, we’re struggling to make progress because, collectively, we lack the courageous leadership needed to stride ahead. To get our planet, economies and societies onto a better path we need more leadership, and better leadership, with business once more playing a vital role.

Take climate change. What’s really stopping the private sector from taking the action needed to help curb global emissions over the next seven years, as science says we must? It isn’t technology. It’s true we haven’t yet invented every innovation we’ll use to decarbonise our economies, but with technology that is already available we could reduce emissions by 45% over this decade (which is necessary to limit warming to 1.5 degrees), as opposed to the 14% increase still currently predicted. In areas such as renewables and climate tech, advances are coming at a stunning rate.

Nor is the market the main obstacle. On the contrary, a convergence of falling costs, growing demand and greater awareness of climate-associated risks are stimulating higher-than-ever flows of capital into low carbon industry. This is further spurred by the regulatory environment now clearly moving in this direction, whether it’s through Europe trying to get off Russian gas, America trying to reposition as a climate champion, China setting the pace on solar and wind, or Brazil’s President Lula vowing to reverse destruction of the Amazon. It’s taking too long to abolish fossil fuels but, still, the writing is on the wall.

And yet, even with all this, here we are. Already living with the devastating effects of global warming and on a disastrous trajectory, because we’re still not moving with the speed and scale needed to keep up with a problem that is racing ahead. We see it over and over again, from nature and biodiversity loss, to the growing inequality and division in our societies. The biggest thing holding back humanity’s efforts to counter these challenges is…humanity itself. We have solutions. We lack urgency, ambition and courage.

This, believe it or not, is good news, because at least it’s in our gift to fix. For better or worse, human beings are masters of our destiny. We dug ourselves into this crisis-filled hole. We can, with enough willpower and enough humanity, start to lead our way out. Indeed, in business getting to a leadership tipping point should be our main ambition for 2023.

What could this kind of game-changing corporate leadership look like – the kind that can transform a company’s impact while driving up industry standards and galvanising governments? Some more good news: despite the abundance of greenwashing and short-sighted self-interest coming from too many C-suites, look closely and you’ll also see three of the most needed leadership characteristics showing up more and more. Our aim should be to grow all three. We need leadership levels to start rising faster than sea levels.

First, we’re finally seeing more business leaders set the targets the world needs, not just the ones they know they can deliver. Playing to win versus playing not to lose. This is central to being what we call a Net Positive leader or company. You don’t just pledge to do a bit less harm, or the minimum that’s expected, or what you can get away with. You commit your company to taking the actions that will restore and regenerate our world. Real leadership is not, for instance, promising to be net-zero by 2050, when it’ll be too late. It’s working to be carbon-negative by 2030, like Microsoft, or already producing more renewable energy than you need for your operations, creating a surplus, like Ikea.

Within the next seven years, the leading wind power producer, Iberdrola, plans to actively improve ecosystems and biodiversity where it operates. Over the same period, the beverage giant Suntory is committed to replenishing more water than it uses in at least half its plants. The packaging and materials company, Ball, has announced it will transition to 100% renewables and source all of its aluminium from certified sustainable sources. These companies don’t know exactly how they will deliver on these targets, but they will work it out. The point is that their audacity and ambition will enable far greater progress than playing it safe, and they are raising the bar for their peers to reach.

Second, we’re seeing, albeit too slowly, more executives realising they should be taking greater responsibility for impacts of their business that are beyond their immediate control. We shouldn’t exaggerate progress here, but it does say something that the likes of Mars, HP, Unilever, JLL, Ford, Trane and Walmart are all now taking action to address their value chains, specifically on so-called “Scope 3” indirect climate emissions from suppliers and consumers. This represents a huge potential multiplier effect, as many companies’ Scope 3 emissions are an order of magnitude greater than their direct emissions, and the system impact of value chain actions can be transformational. These companies also anticipate the looming legislation both in Europe and the US for Scope 3 disclosure on climate and potentially other risks. And it’s not only climate that companies are looking at for impacts in their value chain. It equally says something that in the private sector the more forward-looking leaders now actively push governments to make minimum healthcare available to all, push for financial inclusion, do more to protect human rights, advocate for a just transition and pay decent salaries well above minimum wage.

Third, we’re seeing more examples of CEOs collaborating to collectively drive the transformative changes no company can deliver alone. We launched the Fashion Pact in 2019 and it now comprises over 70 leading CEOs who, by working together, are hastening key reforms, from action to eliminate single-use plastic, to shifting to regenerative cotton and adopting science-based climate targets. Through the First Movers Coalition, global companies have committed $12bn in 2030 purchase commitments for green technologies that can decarbonize the cement and concrete industry and other hard-to-abate sectors such as trucking and aviation. The idea is to jump start the market and help these needed technologies scale.

These kinds of partnerships point to a truly significant shift. The importance of innovative, joint action from industry wasn’t on most CEOs’ radars even just five years ago, and now it’s emerging in sector after sector. We’re realising that, up against today’s unprecedented set of interconnected challenges, leadership isn’t just captaining your own ship, it’s working with others to collectively guide the fleet.

Ambition, responsibility and partnership. If you want to know how we’ll finally start to get ahead of our societal problems and planetary woes, I think this about sums it up. What’s daunting is that all are still in too short supply. But what’s encouraging is that all are in our hands. (For those who want to develop more of these skills, check out the works of the Inner Development Goals, The How Institute for Society or the IMAGINE Oxford experience). The big message for business this January is not that 2023 is going to be challenging – we already know it. It’s that, if we can approach a critical mass of the right kind of leaders, this could be the year we begin turning things around. If we fast-forward twelve months, what do we want to look back and say we achieved? Let it be that humanity stopped trailing behind our biggest problems and finally took control. Let 2023 be the year we find our courage. 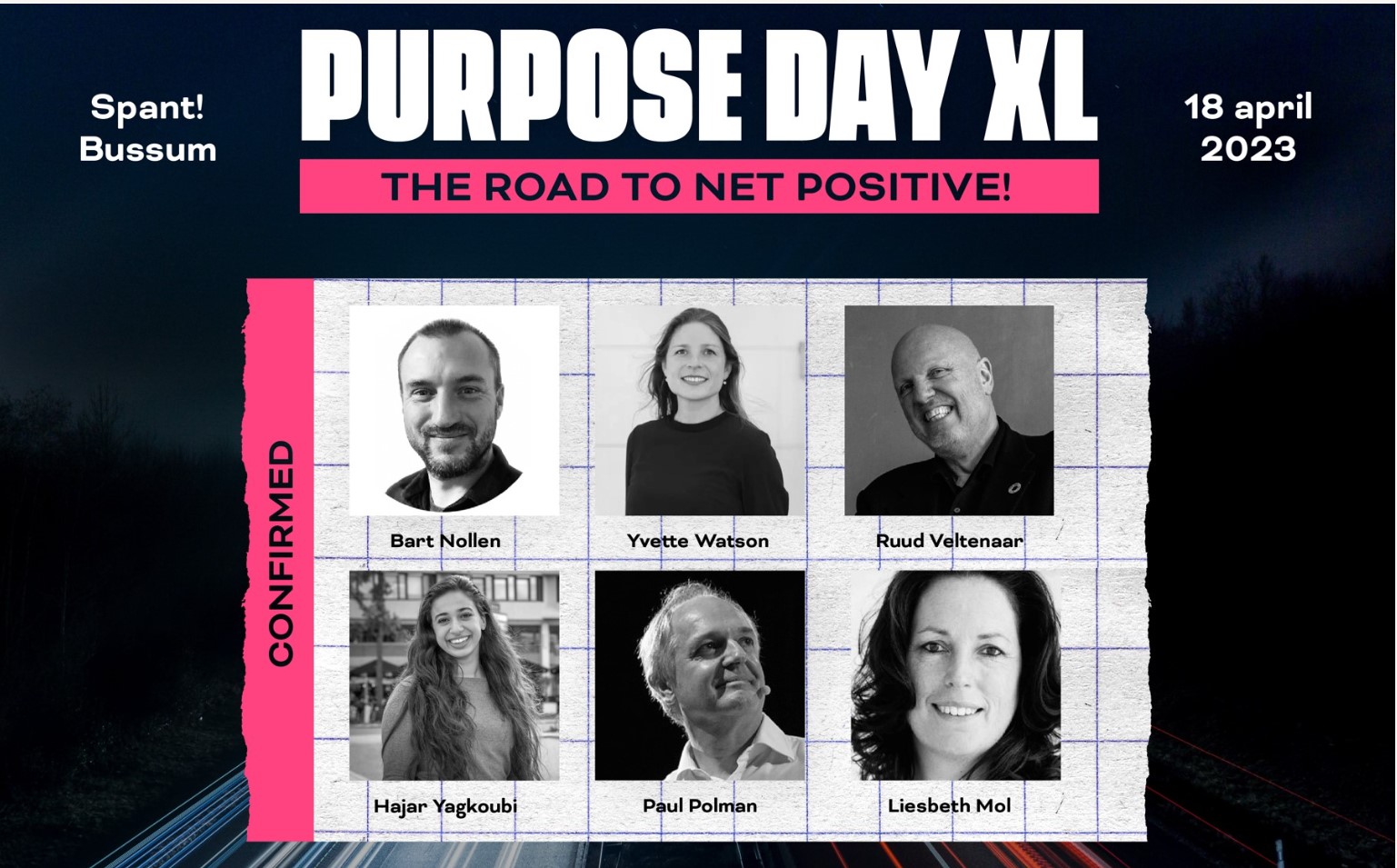