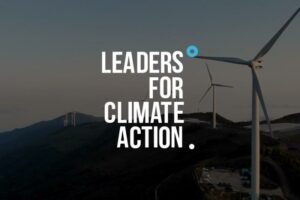 Europe’s leading tech companies, such as Delivery Hero, BlaBla Car, Wefox, Doctolib, Ecosia, GetYourGuide, Flixbus, Glovo, Cabify, Personio and major VC funds such as eVentures, Heartcore Capital, Northzone, Picus Capital, Project A, HoltzbrinckVentures, Acton Capital, Earlybird have joined forces under the initiative, Leaders for Climate Action (LFCA). Their aim is to fight the climate crisis by pledging to turn their own companies carbon-neutral, building an active community that sets more sustainableindustry standards, and influencing policy-makers. Together, the current members of LFCA comprise around 100,000 employees and about a billion active users, which gives the initiative impressive potential to drive measurable climate action on an industry level.

“Our goal is to turn the whole digital industry climate neutral, influence policy makers to set a global carbon price and act as an example forother industries.” – states one of the LFCA co-founders, serial entrepreneur, and investor, Ferry Heilemann.

LFCA takes a unique approach to growth by connecting directly from leader to leader, which has proven its effectiveness. Only one year ago LFCA started out as a small group of entrepreneurs from the Berlin tech industry and grew to a full-scale internationalmovement. Over this time, members of the community have actively worked on the reduction of their carbon footprint (-20% goal) and initiated a collective investment of over €4m in climate protection projects, saving more than 250,000 tons of CO2. This is a promising beginning, considering that more than half of the companies are still in the process of emissions measurement – as such, their efforts in reduction and compensation will only multiply this impact over the coming months.

“We bet on personal commitments. The only way for any founder or CEO to join our initiative is to fulfill the Green Pledge. This means that they have to measure, reduce, and offset their personal carbon footprint, and commit to doing the same with their companies.” – explains LFCA and Gameduell Co-Founder Boris Wasmuth – “Thanks to this clear public and personal commitment, changes incompanies can go much faster than ever before.”

LFCA provides a clear framework and digital tools for climate action. Membership is free of charge but, to maintain it, companies mustrepeat the process of measurement, reduction and compensation from year to year. More than 60% of member companies have already implemented impactful reduction measures, such as switching to renewable energy and carbon-neutral cloud providers or maintaining stricter travel policies. The average member company aims to reduce its carbon footprint by 20% in the first year.

Going beyond the company level, the community drives climate action in finance, too. This year, more than 25 leading VC funds havejoined the “Sustainability Clause” initiated by LFCA. They’ve integrated the clause into both default term sheets and shareholderagreements. As a result, many of the newly financed companies will commit themselves to measuring their carbon emissions andworking on reduction measures.

As much as voluntary actions from individual companies are needed to contribute to the global reduction of greenhouse gases, LFCA’s believe is, that only strong political actions can ensure that greenhouse gases are reduced and removed in all industries and throughout theentire value chains. Therefore, LFCA calls for the immediate establishment of an effective greenhouse gas pricing applied on a regional,country, and ideally, global level. The expansion towards 100% renewable energy and the global implementation of natural greenhouse gas sinks, must be politically enforced as quickly and effectively as possible. In this context, we also support and encourage everyone tojoin the global climate action day on September 25th, when demonstrations and manifestations will take place all across the globe.

The strategy of LFCA is to move climate action out of the niche and make it a mass movement in the European tech industry. “We seeclimate action as a journey that everyone needs to start today at the latest! Therefore, we focus also on companies that are notsustainable yet, but are willing to take measurable steps to change this. If we don’t focus on these segments, the impact of climateaction will simply stay too small” Jeremias Heinrich, Co-Founder LFCA and Arvantis Group says

LFCA is a global community of 650 digital entrepreneurs, united by the will to counter the climate crisis through their own concreteactions and demand more effective legislation from policymakers. Their vision is to turn the digital industry climate-neutral worldwide andthus set an example for other industries.