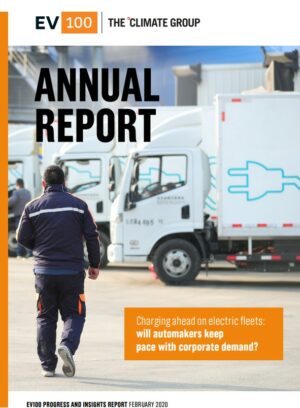 Major international companies are charging ahead on electric vehicles (EVs) to address the climate crisis, tackle air pollution and meet growing customer expectations – but they are increasingly confronted with a lack of vehicle supply, a new report by global non-profit The Climate Group reveals.

The Climate Group runs the global EV100 initiative, which brings together leading companies to accelerate the switch to electric transport and make EVs the new normal by 2030.  They represent the fastest moving big business buyers and have a strong understanding of the state of the EV market. The Dutch company LeasePlan is one of them.

This year’s EV100 Progress and Insights Annual Report shows that members are speeding ahead, with approx. 80,000 EVs already deployed and over 10,000 charge points installed to date.

However, the slow roll-out of electric vehicles from the auto industry is the top barrier to switching their entire fleet, cited by 79% of respondents – up by a third from last year.

As corporate ambition shifts gear, the auto industry is not responding fast enough for supply to match demand. While the European EV market is expected to grow in response to tough EU emissions rules, the US in particular risks being left behind globally – with the right for State level leadership on vehicle emissions standards being fought out in the courts later this year.

Helen Clarkson, CEO, The Climate Group, said: “For years automakers have raised the lack of demand as a problem for moving faster on electric vehicles. Our report shows that big business demand for EVs is increasing but is still not being met by manufacturers. If automakers want to stay competitive, they need to shift to a higher gear on producing EVs – or risk losing their largest customers.”

Christine Weydig, Director, Environment and Energy Programs, Port Authority of New York and New Jersey, said: “Vehicle availability is a big challenge and as of now we mostly seek to procure American vehicles – and we’re seeing that US manufacturers are much further behind some of their foreign counterparts. As more fleet owners like us look to adopt electric vehicles and expand these fleets, we’ll have the purchasing power to catalyze the US market and domestic manufacturers.”

Jim Massey, Global Vice-President, Global Sustainability, AstraZeneca, said, “There are obstacles we face, such as infrastructure, such as access to the electric vehicles we’re going to bring into our fleet. So we’re putting out there the demand and the need for infrastructure so that all of us – government, other sectors – can help solve this problem together.”

At the time of publishing: