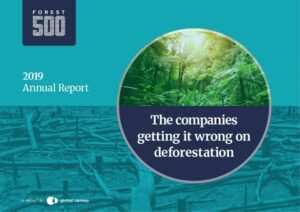 World-famous brands selling everything from high fashion to supermarket favourites are ignoring deforestation caused by demand for the commodities they use, reveals Global Canopy’s annual Forest 500 report released today.

Vast areas of tropical forest are being cleared each year to make way for six globally-traded commodities– palm oil, soy, beef, leather, timber and pulp and paper – used in millions of everyday products. Yet, of the leading companies trading these commodities and the financial institutions that finance them, nearly half (242 of 500) have made no public commitment to end deforestation.

Report author Sarah Rogerson said: “Many of the world’s best-known brands are complicit in the destruction of tropical forests, which undermines our ability to combat global climate change.  They are turning a blind eye to deforestation caused by demand for the commodities they use and failing to publicly recognise their responsibility to act.”

On average an area of tropical forest greater than the size of the Netherlands has been lost every year from 2014 to 2018 as forests are cleared for agriculture, emitting more greenhouse gases than the whole of the EU [2]. The problem made global headlines in 2019 when the Amazon rainforest was devastated by fires, attributed largely to the actions of loggers and farmers [3].

The 2019 Forest 500 report holds to account the 350 companies that produce, trade, use or sell the largest amounts of the six key commodities and the 150 biggest institutions that finance them through bonds, loans and shareholdings. It ranks the strength and implementation of their commitments on deforestation based on publicly available information.

The number and proportion of Forest 500 companies headquartered in each region which have made no deforestation commitments, highlighting some of these companies’ key brands.

Most of the financial institutions that fund the Forest 500 companies do not appear to recognise the risk that their investments may drive deforestation and so contribute to climate change. Those which have made no public commitment on deforestation include four of the world’s five biggest asset managers: BlackRock, Vanguard, State Street and Fidelity Investments, with a combined $17.6 trillion of assets under management.

The report concludes that voluntary corporate pledges to end deforestation by 2020 have failed. Even among companies that made commitments the report highlights backsliding, lack of transparency and potential greenwashing.

Sarah Rogerson said: “Forest risk commodities are in almost everything we eat, from beef in ready meals and burgers, palm oil in biscuits, to soy as a hidden ingredient in poultry and dairy products. Many people would be shocked to know how many familiar brands in their shopping basket may be contributing to the destruction of the Amazon and other tropical forests.”

Global Canopy launched the annual Forest 500 report in 2014 following corporate pledges to end deforestation in commodity supply chains by 2020, made by the Consumer Goods Forum in 2010 and in the New York Declaration on Forests in 2014.

“While some companies have shown real leadership on ending deforestation, overall progress has been painfully slow and this highlights that voluntary commitments by the private sector alone cannot be relied upon to drive change,” said Sarah Rogerson.

“The devastating scale and impact of tropical deforestation is evident to all and there is no longer any excuse for companies and institutions to plead ignorance. They have a clear responsibility to eliminate deforestation in their supply chains, and the missed 2020 deadline should spur governments and consumers to increase pressure on them to prove that they are taking real action.”

The report highlights how lack of action supports the case for due diligence legislation requiring companies to assess, prevent, mitigate and report on deforestation risks in their supply chains and operations. The EU’s Communication on the Adoption of Stepping Up EU Action to Protect and Restore the World’s Forests sends a clear signal that such legislation is being considered.

A full list of companies and financial institutions with no public deforestation commitments is available in the appendix of the report and online.

Note: Mars corrects record on Forest 500 report: ‘We have not removed commitments to soy and palm’