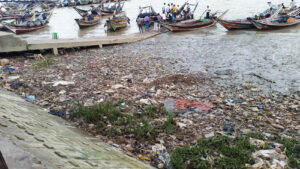 Researchers at The Ocean Cleanup, the Dutch foundation developing advanced technologies to rid the oceans of plastic, today published the first-ever estimate of plastic emissions from rivers into the world’s oceans. Writing in Nature Communications, they calculate that rivers annually transport between 1.15 and 2.41 million metric tons of plastic waste into our oceans. Two-thirds of this input comes from the 20 most polluting rivers, most of which are located on the Asian continent.

It is commonly accepted that most plastic found in the oceans originates from land-based sources. It is also well known that rivers play a particularly important role in transporting mismanaged plastic waste from land into the ocean. Until now, however, researchers had quantified neither the total amount of plastic flowing out of the world’s rivers, nor how much plastic is emitted by each individual river. With today’s study, this information is now available.

For this study, a team lead by The Ocean Cleanup researcher Laurent Lebreton created a model from the combined global geospatial information on: population density, waste management, topography, hydrography and the locations of dams. After calibrating the model against field measurements of plastic flows from various rivers across the world, it was used to obtain a global picture of the annual river plastic emissions into the oceans.

Of the 40,760 ocean-bound rivers studied, just 20 are responsible for two-thirds of the global plastic input. In total, between 1.15 and 2.41 million metric tons of plastic are deposited into the oceans by rivers. The model also shows that plastic input from rivers is highly correlated with drainage of debris from the river banks and creeks leading into main waterways, and that this river-to-ocean input therefore varies per season. Worldwide, three quarters of the plastic released annually enters the oceans between May and October.

Boyan Slat, Founder and CEO of The Ocean Cleanup stated: “We’re pleased to see how many initiatives have been taken in the past few years to raise awareness of the ocean pollution problem. However, for our work in the deep ocean to succeed in the long run, it’s crucial that governments and other organizations speed up their efforts to mitigate the sources of the problem we aim to resolve. The results of this latest study can assist with those efforts.”

& Trust im Not gon tell U Wat U like to Hear...thatz how Real i Am #MVO

im Tryin to Give Her the Benefit to fix Her situationz..but i Always have to step in and Take Reign #MVO

i Just dont UnderStand How State Police Officers are Fully and Well Equipped with weapons..But The Capital Officers was etha MIA/A Part/ or Not Prepared 🤔 #insideJob #CapitalRiot #MVO

“I got a 45 in my Louis bag... And I, ima always ride for my Man... If he got two strikes I'm a take the wrap... 'Cause that's what a real bitch do” #HoodLove @jsullivanmusic #MVO pic.twitter.com/BIXAkDj8Ym