A €4 trillion mismatch is forming between bank lending that aims to be ‘Paris-aligned’ and the market for this corporate lending in Europe, according to new analysis from EU-funded non-profit CDP Europe and global management consulting firm Oliver Wyman. Running hot: accelerating Europe’s path to Paris, released today, estimates that 95% of all corporate lending in Europe comes from banks with a Paris-alignment ambition. But under 1 in 10 European companies so far have emissions targets aligned with Paris’ well-below 2°C goal – meaning banks financing these companies are far from Paris-aligned today. The research is based on nearly 1,000 European companies worth around 80% of Europe’s market value disclosing data in 2020 to CDP, which runs the global environmental disclosure system, and wider market research.

The gap is starting to close. The latest corporate data shows momentum behind better target-setting among companies, with the best decarbonizing fast. 56% of companies report now having a transition plan in place – rising to over three quarters in the energy sector. Encouragingly, over 50% of European companies by market value have now joined the Science Based Targets initiative, which approves whether emissions targets are aligned with the Paris agreement.

The best companies, in terms of decarbonization, reported total emissions reductions of 15% last year, and cut carbon intensity (emissions per revenue) by one fifth.

But wide differences exist. In the steel and electric utilities sectors, the data shows the best companies are up to 4 times as carbon efficient as the lowest performing. And just 35% of companies in the highest-impact industries are so-far disclosing data on their most important indirect – Scope 3 – emissions, which make up a minimum (and underreported) 80% of all total emissions reported.

The report authors also modeled three potential scenarios for 2030, setting out alternative rates of acceleration in corporate target-setting. Based on this, capping warming at 1.5°C would take an 8x increase in the current ambition level of European corporates on emissions.

The scenarios are based on CDP scores, which give an overall indication of a company’s current climate performance, and CDP temperature ratings, which assigns a temperature pathway to companies based on emissions reduction targets. 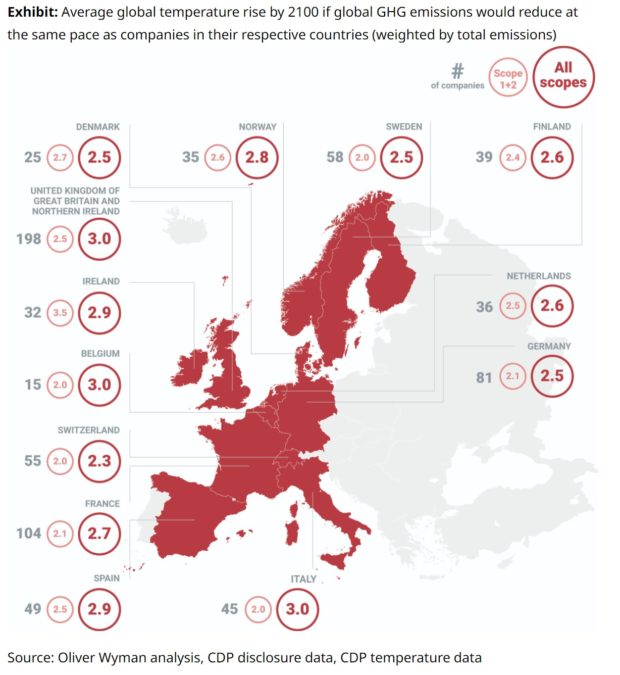 The report also points to the key role banks and investors play in achieving this target. Currently, only half of institutions assess if clients or investee companies have Paris-aligned strategies. But without more engagement, the report estimates that in a ‘modest acceleration’ scenario banks may need to adjust their lending portfolios by 20–30% to meet their Paris goals.

Overall, Europe’s corporate sector is on track for 2.7 °C of global warming by the end of the century – with countries ranging from 2.3°C (Switzerland) to 3.0°C (United Kingdom, Belgium, Italy).

The new report is presented today at the CDP Europe Awards, held with the European Investment Bank on Euronews, where speakers include Angela Merkel and the European Commissioner for Financial Stability, Financial Services and the Capital Markets Union.

Maxfield Weiss, Executive Director of CDP Europe, said of the results: “The European corporate sector is running hot. Based on current ambition, it’s on a 2.7°C path of warming – over a degree more than climate science says we need to achieve to prevent climate change’s most catastrophic impacts. That leading corporates across many sectors are now setting ambitious targets and delivering emissions reductions is positive, and shows rapid decarbonization is doable. But with less than 1 in 10 companies having ambitious enough targets, our new data shows we need far more action from corporates and financial institutions to make good on our goals. Banks and investors have their own big ambitions: now we need them to engage companies more to raise the level of disclosure and action so we accelerate Europe’s path to Paris and to deliver the European Green Deal.”

James Davis, Partner, Financial Services and Head of Sustainable Finance Europe, Oliver Wyman, added: “This year’s paper includes encouraging developments, with more than half of companies setting out transition plans, and many making real strides in cutting emissions. But it also shows how much we need to hasten the pace if we are to hit the Paris targets. Many of the region’s leading financial institutions have set out a big ambition to align their lending and investments with Paris and that will help create a virtuous circle – those companies who are getting ahead of the transition should find it easier to raise capital.”