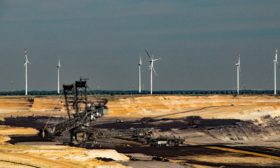 Fossil fuel companies risk wasting $1.6 trillion of expenditure by 2025 if they base their business on emissions policies already announced by governments instead of international climate goals, Carbon Tracker warns in a report released today, that models the IEA’s 1.75C scenario for the first time.

Mind the gap: the $1.6 trillion energy transition risk is the first report to analyse the upstream financial implications for investors of the yawning gap between the Paris Agreement, which pledges to keep climate change well below 2C above pre-industrial times and aims for 1.5C, and government policies, which are consistent with 2.7C of warming.

“At present, governments’ policies fall a long way short of the ultimate goal committed to at Paris, but we should expect a ratcheting up of international efforts. Companies that misread the signals and overinvest in marginal oil, gas and coal projects based on a false sense of security could destroy shareholder value worth billions of dollars”

Carbon Tracker compared demand for fossil fuels in a 1.75C world – the mid-point of the Paris Agreement – with demand in a 2.7C world, looking at oil, gas and coal production to 2035 and capital investment to 2025. It found:

OIL – $1.3 trillion of future spending is at risk. New oil sands investments will be uneconomic, and only a minority of potential new Arctic and extra heavy oil investment will go ahead. The US is most exposed with $545 billion at risk, followed by Canada ($110bln), China ($107bln), Russia ($85bln) and Brazil ($70bln).

GAS – $228 billion of future investment is at risk. Half of potential future spending of European gas development could be uneconomic and there will be no need for new liquefied natural gas (LNG) capacity for a decade. Russia is most exposed with $57 billion at risk, followed by the US ($32bln), Qatar ($14bln) and Australia, Canada and Norway (all $13bln).

COAL – $62 billion, is at risk, including $41 billion in China and $10 billion in the US. No new coal mines will be viable except in India to replace imports, and no new export coal production will be needed.

Private investors are at greater risk than state-owned companies. They are exposed to 88% of the spending on unneeded oil and gas projects.  For coal, private sector capital spending in a 1.75C world is half the level under 2.7C. The report notes: “Investors are increasingly focusing on an “orderly transition” which minimises financial disruption in the process.”

Previous Carbon Tracker research has shown how the rapid growth of clean technologies is undermining the business case for fossil fuel investment irrespective of climate targets. Falling costs of electric vehicles and solar technology could halt global demand for oil and coal from 2020.[1]

Andrew Grant said: “The energy industry is entering an era of uncertainty. Technological developments and climate policy are combining to slow fossil fuel demand in a way that is unprecedented in the modern world, leading investors to call for businesses to be tested against scenarios that reflect higher levels of climate ambition.

“Energy companies must be transparent about their thinking surrounding low-carbon outcomes, and convince shareholders that they are taking these risks seriously.”

The study is the first to model demand for oil, gas and thermal coal under the International Energy Agency’s Beyond 2 Degrees Scenario introduced last year, aligned with 1.75C, the mid-point of the Paris Agreement, and compare it with the IEA’s New Policies Scenario, aligned with 2.7C, consistent with emissions policies announced by global governments. With supply outstripping demand it assumes that the lowest cost projects are most likely to be needed, while high-cost projects relying on higher prices are most likely to be uneconomic.