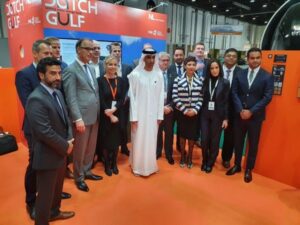 The newly formed Dutch Sustainability Group (DSG) signed a Memorandum of Understanding Tuesday to jointly help the UAE achieve its Sustainable Development Goals. The Memorandum was signed at the backdrop of the Abu Dhabi Sustainability Week (ADSW) in the presence of His Excellency Dr. Thani Ahmed Al Zeyoudi the UAE’s Minister of Climate Change and Environment.

The new group was formed under the umbrella of the Netherlands Business Council (NBC) and supported by the Embassy and Consulate-General of the Kingdom of the Netherlands. This first of its kind country initiative brings together expertise from a wide variety of sectors to deliver sustainability projects in the UAE.

Chairman of the NBC Dubai Stefanie Schachtschabel emphasized the uniqueness of the initiative where a group was formed under the umbrella of the NBC and supported by both the Embassy and Consulate-General of the Kingdom of the Netherlands to jointly support the UAE achieving its Sustainable Development Goals.

The DSG consists of companies that all have its origins in the Netherlands, a country known for its innovative power and know-how on Sustainability. DSG members include Unilever Gulf, Signify, ING Bank, Air France-KLM, Albwardy Damen, Royal BAM, LeasePlan, FrieslandCampina, Boskalis, Vopak and Van Oord.

“It is all about our future generations living in the UAE, in The Netherlands and all over the world. This initiative is about sustainable development that meets current needs without compromising the ability of future generations anywhere else to meet their own”, said Schachtschabel.

Guided by DSG’s mission statement: “Delivering Dutch Sustainability & Innovations to the Middle East”, it has formulated three pillars based on which it will develop projects. The first pillar is about Education and Communication, for example with workshops from all industry sectors on schools and trainings at companies.

Next to that there will be Thought Leadership activities to demonstrate how innovations and new business models can lead to a more sustainable world. The third pillar aims to provide training and knowledge transfer to government entities in the country to support decision making on their sustainability targets. Based on these pillars the member companies envision to work together to deliver sustainability projects in the UAE.