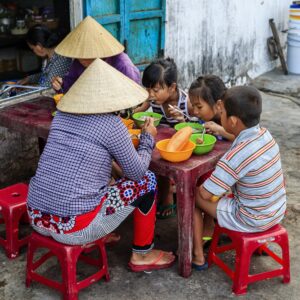 Many leading food and drink manufacturers have stepped up efforts to encourage better diets, largely by  adopting better policies and publishing more information, according to the 2018 Global Access to Nutrition  Index, which measures the efforts being made by the world’s largest food and beverage manufacturers to  reduce ill health due to poor diets. Some have also increased efforts to address undernutrition, including by  fortifying foods and supporting education programmes.

However, most companies are doing far too little to ensure that poor people have access to affordable  healthier diets, including fortified products, and there is still widespread lack of compliance with the  International Code of Marketing of Breast-milk Substitutes. Analysis of 23,013 products sold in nine countries  by the companies in the Index reveals that less than a third of them can be classified as healthy. Many  companies state that a higher proportion of their products are healthy, indicating that their definition is less  strict than the two objective and independently-verified models used by the Access to Nutrition Foundation.

Nestlé tops the 2018 Index, with above average performance in all, and improvements in most, of the  categories of the Index. Meanwhile, FrieslandCampina, a Dutch dairy cooperative, has improved the most  since 2016, climbing four places in the ranking largely thanks to a new strategy, new initiatives to tackle  undernutrition and more responsible marketing commitments. Nine companies scored 5 or more, compared  to only 2 in 2016; and the average score overall went up from 2.5 to 3.3 out of 10, but remains quite low.

Inge Kauer, Executive Director of the Access to Nutrition Foundation said: “There is good news and bad. On  the one hand, we see evidence that a number of companies are upping their commitments to tackle various  aspects of the nutrition challenge, including persistent high levels of undernutrition in many emerging  markets. They are doing this, for example, by reformulating some products, improving labeling and addressing  undernutrition as part of their core business strategies. However, the results also show companies need to  get better at ‘walking the talk’ and in particular need to set clear and verifiable targets for improving the  healthiness of their product ranges.”

The 22 food and beverage companies included in the 2018 Index generate an estimated $500 billion in annual  sales in over 200 countries and their products play a significant and increasing role in the diets of millions of  people. The Indexes are designed to measure whether manufacturers are being responsible in the way they  make, sell and market their products to address the global nutrition crisis, which sees one-in-three people  either overweight or undernourished, and contribute to the Sustainable Development Goals.

Paulus Verschuren, Acting Chair of the Access to Nutrition Foundation said: “It is alarming that less than a  third of the products surveyed by the Access to Nutrition Foundation were classified as healthy. The  difference between our analysis and companies’ own assessments shows the need for more transparency on  how companies measure healthiness and set targets to improve it. Companies could and should do more to  develop and market healthier products. We urge them to take action.”

As in previous editions, the 2018 Index also includes a sub-ranking of six of the world’s largest baby food companies based on their level of compliance with the global gold standard on marketing breast-milk  substitutes – the International Code of Marketing of Breast-milk Substitutes. Breastfeeding saves lives,  especially in developing countries, and lays the foundation for a healthy life. It therefore has a vital role in  infants’ health. The pervasive marketing of breast-milk substitutes can undermine efforts to promote and  encourage breastfeeding.

This year, Danone tops the BMS Marketing sub-ranking with a score of 46% – considerably better than the  31% it scored in 2016. Nestlé ranks second with a score of 45%, while Abbott ranks third, having substantially  improved its score to 34% from 7%. However, all companies need to expand the scope of their marketing  policies to encompass all formulas made for children up to 3 years of age and to apply their policies in  developing countries as well as developed ones.

ATNF’s studies in Thailand and Nigeria found nearly 3,000 incidences (2,807 in Thailand and 130 in Nigeria) of  non-compliant marketing of the six rated companies, mostly point-of-sale promotions on the websites of  major online retailers. Baby food companies need to do much more to curtail this increasingly pervasive form  of marketing. 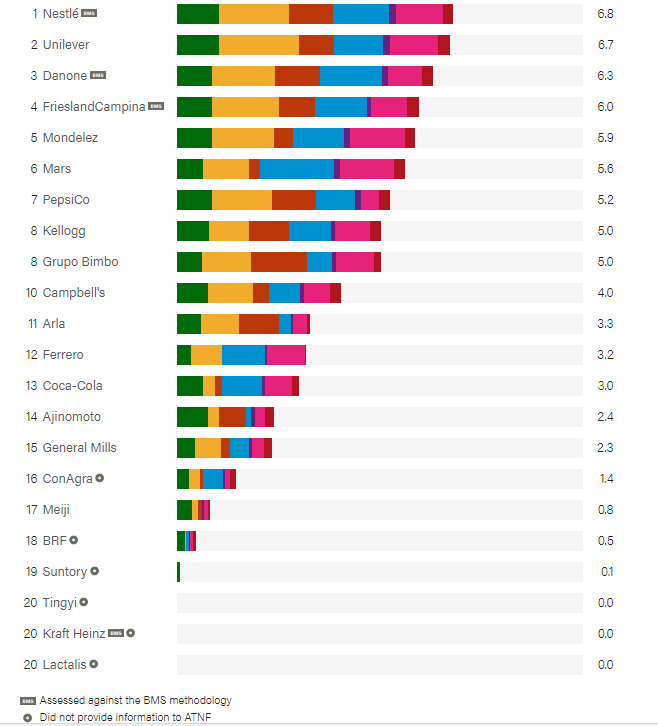 The 2018 Index report calls on companies to, first and foremost, work to improve the nutritional quality of  their existing products, particularly established, high-sales volume products. It also calls on companies’ to: