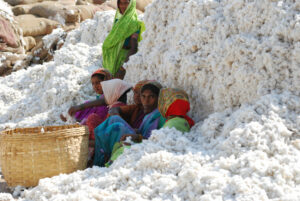 This year the scope of the ranking will be broadened. The target list of companies (PDF) has been expanded to offer a more global representation of consumer-facing companies estimated to use more than 10,000 metric tons of lint cotton annually and include companies from emerging markets and online retailers.

Creating a list of the largest corporate cotton users is challenging as most companies do not publish the volumes they use in their products. PAN UK, Solidaridad and WWF welcome feedback from any companies who believe their cotton use has been under or over-estimated, as well as those whose may have been omitted from the list and wish to be included.

The first Cotton Ranking (PDF) published in 2016 showed that the majority of companies using most cotton globally were failing to deliver on cotton sustainability, with just eight companies out of 37 showing positive progress in the ranking.

By conducting a second Cotton Ranking in 2017, PAN UK, Solidaridad and WWF expect to see that more companies have taken steps forward on their sustainable cotton policies, traceability and sourcing. As transparency and accountability to customers is considered paramount by the three NGOs, only publicly available information will be used in scoring company performance. The report will be published in October 2017 so as to take into account companies’ public reporting on their 2016 performance.

The report will also include a market update on the available supply and uptake of cotton from the main cotton sustainability standards (organic, Fairtrade, Cotton Made in Africa and Better Cotton). While around 10% of global cotton supply was grown according to one of these standards in 2014, less than a fifth of this amount was actually being bought as more sustainable cotton, with the rest being sold as conventional due to lack of demand from top brands and companies.

The Cotton Ranking 2016 report can be downloaded here along with the briefing ‘Mind the Gap: Towards a More Sustainable Cotton Market’ (PDF) published in April 2016 which gives an overview of the market for more sustainable cotton.

Thirty-seven companies estimated globally to use the most cotton in their products were scored on their sustainable cotton policy, sourcing, and traceability. Only publicly available information was used in scoring company performance.

The Cotton Ranking focuses on companies rather than individual brands as, while sustainability practices can vary significantly between different brands, entire companies need to change sourcing practices in order to transform cotton production.

This is a Bad time for People with Allergies. Ppl are The Fuckin Most...& cant tell the difference #iGuess #Covid_19 #Covid19 #MVO