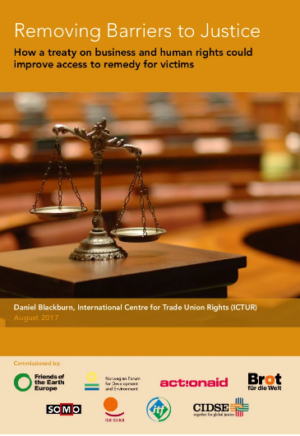 The new report ‘Removing Barriers to Justice’ – commissioned by a coalition of eight civil society organisations – shows how a UN Treaty on Business and Human Rights could improve access to remedy for victims of business-related human rights abuses in future. From oil pollution by Shell in Nigeria to waste dumping by Trafigura in Côte d’Ivoire, the report delves into five well-documented cases of corporate abuse that played partly out in European courts. In advance of crucial Treaty negotiations coming up next month at the United Nations in Geneva, the report makes seven recommendations to help create a Treaty that would improve access to remedy for victims.

For victims of business-related human rights abuses or environmental damage, access to justice is hard to achieve. Examples of human rights abuses by multinational corporations include land rights violations, forced labour, lack of protection for workers and local people from hazardous substances, as well as poor safety standards. International businesses that are responsible for some of these abuses remain largely outside the formal regulatory system of human rights law.

But there is hope for the victims. In June 2014, a ground-breaking resolution was adopted by the Human Rights Council that established an Inter-Governmental Working Group to develop an ‘international legally binding instrument on transnational corporations and other business enterprises with respect to human rights’.

Mariëtte van Huijstee from the Centre for Research on Multinational Corporations (SOMO) said: “Such a binding instrument, or Treaty, has real potential to bring about change. It represents an opportunity to improve and coordinate policies and legal developments at the domestic level. Europe can play an important role in this process.”

The report offers a well argued and well-documented analysis, showing how a UN Treaty could improve access to remedy for victims of abuse. It was commissioned by a coalition consisting of: ActionAid Netherlands, Brot für die Welt, Centre for Research on Multinational Corporations (SOMO), CIDSE,Friends of the Earth Europe, International Trade Union Confederation (ITUC),International Transport Workers’ Federation (ITF) and the Norwegian ForUM for Development and Environment (ForUM). The organisations are associated with the Treaty Alliance and are active across Europe. They are seeking to inform the upcoming negotiations in the Human Right Council of the United Nation between 23 and 27 October in Geneva.

The author – Daniel Blackburn (Director of the International Centre for Trade Union Rights) – chose five cases of litigation that played out partly in European courts. He then analysed – from a victim’s point of view – the barriers they faced in accessing remedy for the abuses they suffered. He went on to analyse the existing and potential policy approaches designed to address these barriers – identifying elements that could be built upon by a Treaty.

Seven recommendations in a nutshell

The report identifies seven areas of reform that are explained in more detail. These include: