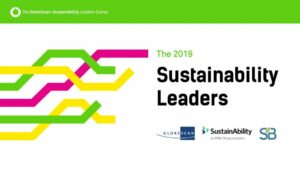 Findings from the just-released 2019 Leaders Survey by GlobeScan and SustainAbility show that, while still trailing Unilever, Patagonia and IKEA have made substantial gains in recognition for sustainability leadership over the past year. The gap between the top tier and second tier in this annual ranking has narrowed, as Unilever’s long-standing dominance has declined.

The Leaders Survey has tracked global expert opinions on the evolution of the sustainability agenda since 1997 as well as stakeholders’ views on which companies are leaders and why. This survey has never been more timely given the growing interest in sustainable business from investors, consumers, governments and NGOs.

Over 800 experts in 78 countries were asked, unprompted, to name companies that they see as being leaders in integrating sustainability into their business strategy.

Unilever continues to be seen as the global leader on sustainability, with mentions from 37 percent of sustainability experts responding. While the company still holds a dominant leadership position, now for the eighth year in a row, its 2019 ranking is down 10 points in comparison with 2018 (47%).

Mark Lee, Executive Director at SustainAbility, said: “While Unilever continues to deserve accolades, it is terrific to see Patagonia and IKEA closing the leadership gap, and we hope other companies make similar strides forward in future years, making the leader board ever more crowded at the top.”

Eric Whan, Director at GlobeScan, said: “The increase in recognition for Patagonia, IKEA, Danone, and Natura is exciting and reinforces the importance of sustainable and purposeful business.”

Interface sits in fourth position at nine percent (down one point compared to 2018) and Natura ranks fifth at eight percent (up four points compared to 2018), which is the Brazilian company’s strongest showing in the history of this survey.

BASF returns to the leaderboard in 2019 in tenth position, having dropped off for the past two years.

When asked to identify leaders headquartered in their own regions, experts in Latin America and North America pick clear leaders: Natura (58%) and Patagonia (36%), respectively. Natura leads by the widest margin in Latin America.

In Europe, experts mention Unilever and IKEA as regional leaders in sustainability.

In Asia-Pacific, Toyota (10%) and Tata (7%) are the most recognized companies headquartered in the region. Experts in Asia-Pacific are least able to identify a regional leader, and also cited a wide range of local companies.

This study was conducted in partnership with Sustainable Brands. The full report will be made available later in June 2019.