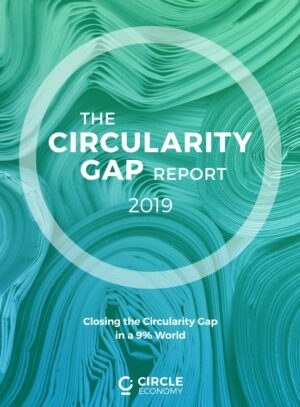 The world can maximise chances of avoiding dangerous climate change by moving to a circular economy, reveals a report from impact organisation Circle Economy launched today at Davos during the annual meeting of the World Economic Forum. It highlights the vast scope to reduce greenhouse gas emissions by applying circular principles – re-use, re-manufacturing and re-cycling – to key sectors such as the built environment. Yet it notes that most governments barely consider circular economy measures in policies aimed at meeting the UN target of limiting global warming to 1.5°C. The Circularity Gap Report 2019 finds that the global economy is only 9% circular – just 9% of the 92.8 billion tonnes of minerals, fossil fuels, metals and biomass that enter the economy are re-used annually.

Climate change and material use are closely linked. Circle Economy calculates that 62% of global greenhouse gas emissions (excluding those from land use and forestry) are released during the extraction, processing and manufacturing of goods to serve society’s needs; only 38% are emitted in the delivery and use of products and services.

Yet global use of materials is accelerating. It has more than tripled since 1970 and could double again by 2050 without action, according to the UN International Resource Panel. Circle Economy’s CEO, Harald Friedl, said: “A 1.5 degree world can only be a circular world. Recycling, greater resource efficiency and circular business models offer huge scope to reduce emissions. A systemic approach to applying these strategies would tip the balance in the battle against global warming.

“Governments’ climate change strategies have focused on renewable energy, energy efficiency and avoiding deforestation but they have overlooked the vast potential of the circular economy. They should re-engineer supply chains all the way back to the wells, fields, mines and quarries where our resources originate so that we consume fewer raw materials. This will not only reduce emissions but also boost growth by making economies more efficient.”

The report calls on governments to take action to move from a linear “Take-Make-Waste” economy to a circular economy that maximises the use of existing assets, while reducing dependence on new raw materials and minimising waste. It argues that innovation to extend the lifespan of existing resources will not only curb
emissions but also reduce social inequality and foster low-carbon growth.

Cutting emissions and waste from the built environment

Circular strategies to reduce waste are particularly important in the built environment, which accounts for a fifth of global emissions. Circle Economy calculates that nearly half of all materials going into the economy – 42.4 billion tonnes a year — are used in the construction and maintenance of houses, offices, roads and infrastructure.

The opportunity requires global coordination, as countries will need to adopt different strategies. In emerging economies, where high population growth and rapid urbanisation is driving a massive building boom, the challenge is to adopt building practices which minimise the use of raw materials and consequent emissions.

In China, for example, the majority of houses and roads people will use in the next 10-50 years have yet to be built. Circle Economy calculates that its built environment emits a staggering 3.7 billion tonnes of greenhouse gases every year and is set to more than double in size by 2050, from 239 to 562 billion tonnes of material. While less than 2% of China’s construction inputs currently consist of reused or recycled materials, the report notes that increasing this proportion can make a huge impact on emissions. Promisingly, the recycling rate for construction and demolition waste had increased to 10% by 2015 and continues to rise.

In Europe and other developed economies with a mature housing stock, growth in the built environment is much slower. The report calls on these countries to maximise the value of existing buildings by extending their lifespan, improving energy efficiency and finding new uses for them when necessary. It is also important to increase reuse and recycling of material in Europe’s built environment from the current level of 12%.

Harald Friedl said: “Huge work remains to be done in established economies where the priority is to make better use of existing infrastructure. At the same time it’s crucial that we work with emerging economies to avoid mistakes made in the past. Now is the time to replace traditional building methods with state-of-the-art practices which will not lock in high emissions for decades to come. Countries will make maximum impact by designing not just homes, buildings and infrastructure but whole cities for maximum resource efficiency.”

Fundamental principles of a circular built environment include:

The report highlights three key circular strategies which could be adapted throughout the economy and gives
examples:

The Netherlands has set itself a target of becoming 50% circular by 2030 and 100% by 2050, but most governments have yet to wake up to the potential of the circular economy. The report calls on governments to ensure that climate change and circular economy strategies are joined up to achieve maximum impact, through the use of tax and spending plans to drive change. They should:

Circle Economy’s CEO, Harald Friedl, will officially launch the report during the World Economic Forum in Davos (22-25 January), an annual meeting which brings together some 2,500 politicians, business leaders and economists to discuss the most pressing issues facing the world today.