European companies dominate InfluenceMap’s 2021 ‘A-List’ of climate lobbying, recognizing the increasing level of ambition of a core group of leaders pushing for Paris-aligned action. The list features 15 companies which demonstrate support for ambitious climate policy, strategic levels of support, and sector leadership. It includes companies such as Unilever, AkzoNobel, Iberdrola, Nestlé, Tesla and IKEA. In putting together the ‘A-List’, InfluenceMap assessed thousands of pieces of evidence covering hundreds of companies. The criteria used to determine which companies should be included is stricter than the first ‘A-List’ in 2018 to reflect the increasing urgency of climate action. 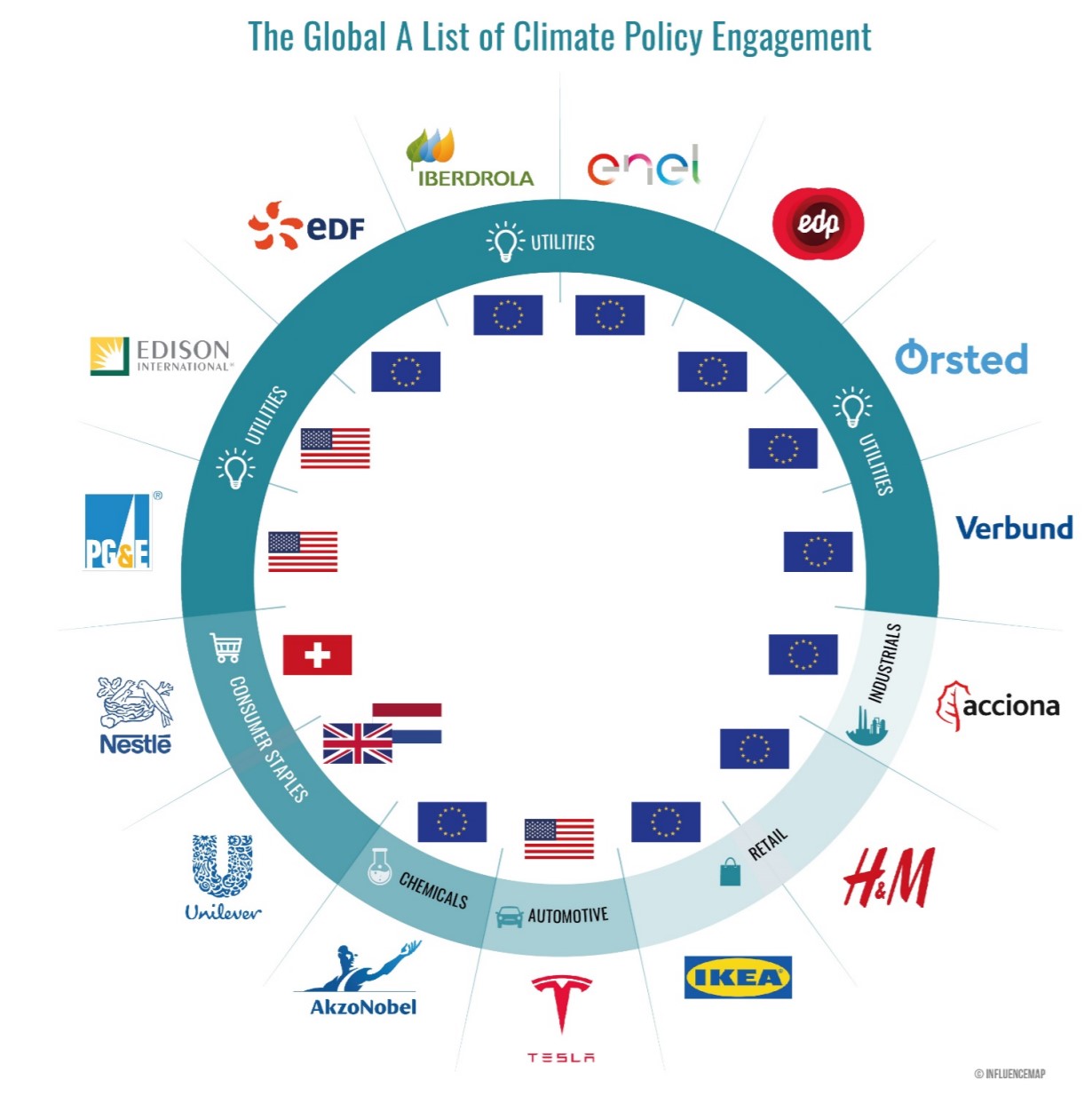 InfluenceMap also identified 21 companies which have the potential to be included in the ‘A-List’ but are currently being held back by either a lack of policy ambition, low engagement scores, or links to obstructive industry groups. The Potential Leaders list includes companies such as Microsoft, Apple, PepsiCo, Aeon, and Maersk. The report also highlights companies which do not yet make the ‘A-List’ or the Potential Leaders list, but show leadership in sectors which have been historically resistant to ambitious climate policy. In the industrial sector, for example, this includes 3M, Cummins, Trane Technologies, and Johnson Controls.

InfluenceMap Program Manager Kendra Haven said: “As the scientific consensus has sharpened on what next steps are needed to deal with the climate crisis, so too has the ambition from a core group of corporate leaders. “The 2021 ‘A-List’recognizes companies which are actively supporting Paris-aligned climate policy. “But it’s also a reminder that large parts of corporate world appear to remain ambivalent or actively opposed to bold climate action. “Hundreds of companies were assessed for possible inclusion in the ‘A-List’, but only 15 met the criteria. “One of the key reasons for this is that many pro-climate corporations still maintain memberships to obstructive lobby groups such as the US Chamber of Commerce.”

The results of the ‘A-List’ indicate a strong correlation between corporate leadership on climate and ambitious policy action by lawmakers. This link between corporate engagement and policy outcomes becomes even more important as world leaders prepare for next month’s climate talks in Glasgow.

Nigel Topping, UN High Level Climate Action Champion, said: “Robust commitments to net zero must be more than just operational; businesses and investors also need to align their policy advocacy with their climate action to accelerate the transition to a zero-carbon world. “We welcome InfluenceMap’s ‘A-List’ report identifying those companies which actively advocate for the policies required to decarbonize at pace. “It’s fantastic to see many Race to Zero members included in this report, and I urge all other businesses and investors to raise the bar on their own policy advocacy and strive to join InfluenceMap’s ‘A-List’, in this race to COP26 and beyond.”

Eliot Whittington, Director of Policy and the Corporate Leaders Groups, Cambridge Institute for Sustainability leadership, said: “InfluenceMap’s 2021 ‘A-List’report is a fantastic tool and resource that any business serious about its sustainability journey should closely examine. “Increasingly businesses understand that they need to deliver climate action and sustainability  through the whole of their business activities including their lobbying and public affairs impact. “This report showcases the invaluable policy engagement work undertaken by many businesses and I’m delighted that many members of CISL’s Corporate Leaders Groups are highlighted in the report, as well as the group itself. “We all need to recognize business leadership on climate change where it occurs and use that example to inspire and demand even greater action from across the business community.”