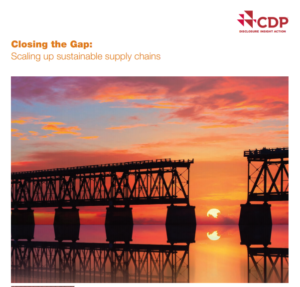 Leading retail powerhouses are stepping up on supply chain sustainability, according to the latest figures from CDP, a global environmental impact non-profit. The world’s largest retailer, Walmart, has just been joined by three more of the top 20 retail companies – CVS Health, Target Corporation and Tesco – in collecting data from suppliers to reduce environmental risk and cut carbon emissions in the supply chain.

The leadership shown by the retail sector is part of a wider surge of action from private and public-sector organizations, harnessing their purchasing power to tackle climate change, deforestation and water security. Ten years after CDP started collecting supply chain data on behalf of the world’s largest purchasing organizations, 115 organizations – representing a combined annual spend of more than US$3.3 trillion – are now requesting data from over 11,500 suppliers. This is more than a 15% increase from last year, when 99 organizations requested data.

Sonya Bhonsle, Head of Supply Chain at CDP, commented: “With emissions in the supply chain on average around four times greater than those from a company’s direct operations – and rising to up to seven times greater for retailers and consumer-facing companies – large multinational corporations cannot comprehensively address their environmental impact without looking to their supply chains.

“It’s very encouraging to see so many of the world’s biggest buyers taking supply chain sustainability seriously. By requesting data from their suppliers, they are shining a light on the risks hidden deep within their production chains – and uncovering a myriad of opportunities for reducing their overall environmental footprint, boosting innovation and cutting costs.”

The rise in companies scrutinizing their supply chains coincides with growing momentum behind the take-up of science-based targets – goals that allow companies to reduce their emissions in line with the decarbonization required to keep global temperature increase below two degrees Celsius, the central aim of the Paris Agreement. The Science Based Targets initiative (SBTi), which helps companies develop and approves such targets, requires companies to set scope 3 targets if their scope 3 emissions account for at least 40% of their total emissions. For global retailers that do not manufacture many of the products they sell, scope 3 emissions in their supply chain can be far greater than 40%.

Ariane Grazian, Senior Manager, Walmart Sustainability at Walmart, which has been requesting data from its suppliers for ten years, commented: “We are proud of the improvements we’ve made in reducing our own emissions, but we aim to do more. That’s why Walmart is working with CDP, our suppliers and others on Project Gigaton – an approved science-based target initiative aimed at avoiding a gigaton (one billon metric tons) of emissions from the global value chain by 2030. Walmart is collaborating with CDP’s supply chain program to accelerate action and track suppliers’ progress toward Project Gigaton. In year one, Project Gigaton has helped inspire action that has led to the avoidance of 20 million metric tons of emissions and has expanded into China and the UK with participation from over 400 suppliers with operations in over 30 countries.”

In addition to the retailers, other organizations which have begun requesting supplier data through CDP in 2018 include:

Jennifer Silberman, Vice President, Corporate Responsibility at Target commented: “The future of Target’s business depends on taking care of the resources we have today, so we are constantly working to find more environmentally friendly ways to bring guests the products they want. We have been reporting our own emissions to CDP since 2012, and will now seek this data from key Target suppliers to better support them in achieving greater efficiency, investments in innovation and sustainable choices. As Target puts the needs of people, communities and the planet at the heart of how we work today, to build a better tomorrow, we are confident this new work with CDP will be a catalyst for change across the industry.”

While suppliers’ carbon emissions have long been on the radar of companies working with CDP, a surge of interest in deforestation and water security sees a growing number of purchasing organizations also engaging with strategic suppliers on their impacts on forests and water.

In 2017, companies reported a total of 3,770 water risks via CDP – risks that threaten their license to operate, their ability to grow and the security of their supply chains. This year, 40 companies are countering these risks by asking suppliers to report on their water use and management strategies, with Japanese IT company Fujitsu and automakers Honda, Jaguar Land Rover and Volkswagen among those engaging their suppliers on water security for the first time.

Meanwhile, with up to US$941 billion of turnover in publicly listed companies dependent on commodities linked to deforestation, the number of organizations leveraging their purchasing power to achieve deforestation-free commodity supply chains has doubled from seven to 14 in just a year. Businesses requesting that their suppliers disclose on commodities that drive deforestation – palm oil, soy, cattle products (beef and leather) and timber products (paper and wood) – now include U.S. based multi-national Kellogg Company, Japanese chemical & cosmetics company KAO Corporation, and German flavor & fragrance producer Symrise.

Diane Holdorf, Vice President and Chief Sustainability Officer at Kellogg Companycommented: “Kellogg is working on multiple fronts to address climate change risks; our supply chain being one. In 2015, we committed to science-based targets to reduce our greenhouse gas emissions by 65% by the year 2050. We also committed to a 50% reduction of emissions in our supply chain by 2050. To do this we are partnering with our direct suppliers to report and track emissions through CDP. By 2020, our goal is to have 75% of our global supplier spend reporting through CDP. As of 2017, we achieved 65%. This year, we are also asking key suppliers to report their forest risks and impacts. This will help us understand how they are managing the risks linked to deforestation; a substantial source of the emissions causing climate change.”

Prodipto Roy, Program Manager, Buildings & Industry, at ClimateWorks Foundation, the philanthropic NGO whose Buildings and Industry portfolio has supported CDP’s increased engagement with retailers, commented: “Given that they sit at the top of a large global supply chain, retail companies can have a huge impact on awareness and action to reduce emissions further down that chain. By setting a science-based target and asking their suppliers to disclose to CDP, retailers are sending a strong message that they are committed to making the transition to a low-carbon economy, and that they expect their suppliers to come with them on that journey. We applaud these companies for working to cascade action throughout their global supply chains and hope that their leadership inspires additional corporations to also catalyze change.