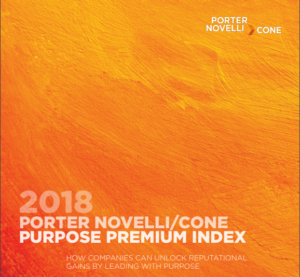 Purpose is one of three critical dimensions of overall reputation, according to a study by Porter Novelli and Cone . The study, examining consumer perceptions of the top 200 companies in the U.S., also finds Purpose and Reputation are intrinsically linked.

The research revealed there is a strong correlation between Purpose and Reputation as these scores moved together for nearly nine out of every 10 companies (88%) ranked. In fact, of the top 10 leaders named on both the Purpose and Reputation lists, four companies landed on both lists – Amazon, UPS, Colgate-Palmolive and Alphabet. The top 10 Purpose-driven companies, according to consumers, included: Amazon, UPS, Community Health Systems, Disney, HP, Johnson & Johnson, Cardinal Health, Alphabet and Kraft Heinz.

“As we’ve seen repeatedly in 2018, corporate reputation is painstakingly curated, carefully protected and easily lost. When it comes to reputation scores, every point up or down matters to both the consumer and also affects long-term business performance and value,” says Justin Greeves, Executive Vice President, Global Research & Services, Porter Novelli. “The Purpose Premium is the extra reputational boost a company gains by leading with Purpose and edging out its competitors in a world where what a brand stands for increasingly matters to the consumer.”

To better understand reputation, the Index was aggregated into correspondent elements under three overarching dimensions: Quality, Vision and Purpose. Quality represented the largest portion of overall reputation, accounting for 65 percent. Elements of the Quality dimension included reliability, security, trustworthiness and affordability. Vision accounted for 18 percent of reputation, under which consumers prioritized categories such as innovation, profitability and creativity.

Purpose is the final major dimension of reputation. Comprising 13 percent of a company’s overall reputation, the Purpose Premium, can boost overall reputation to edge out competitors and build vital brand affinity among consumers.

Consumers want companies to act, care and advocate. When it comes to what Purpose attributes are most important to reputation, Americans prioritize companies that are:

“Purpose itself is a multifaceted concept in the eyes of Americans,” says Alison DaSilva, Executive Vice President, Purpose and CSR, Cone, a Porter Novelli company. “As we peel back the onion, we see consumers first expect companies to operate responsibly. However, they also want to know that companies truly care – and this means advocating for issues that are important to them, as well as supporting social and environmental causes.”

Not only do Americans think well of Purpose-driven companies, they are also willing to reward them in a number of ways. Companies with a higher Purpose ranking compared to their laggard peers will reap greater benefits, as consumers are:

Purpose leaders will also benefit by cultivating more engaged audiences. Consumers are significantly more likely to consume content from companies with higher Purpose rankings. They are:

“We see from these findings that Purpose is a way of communicating shared values with stakeholders and getting a business benefit at the same time. A company is not just judged by what it makes or how much it makes, but also by how it conducts itself in our society,” says Greeves. “We intuitively knew this but now we can demonstrate its true impact and show companies how to lead the way on the many dimensions that matter.”