Most of the world’s biggest exporters are failing to punish corporations paying bribes overseas, Transparency International revealed today. The anti-corruption organisation has released the 2018 edition of its Exporting Corruption report, rating countries based on their enforcement against foreign bribery under the OECD Anti-Bribery Convention.

The report finds that only 11 of the 44 jurisdictions rated conduct active or moderate enforcement against companies bribing abroad. These are Germany, Israel, Italy, Norway, Switzerland, the United Kingdom and the United States(active enforcement); and Australia, Brazil, Portugal and Sweden (moderate enforcement). Together, these countries are responsible for 30.8 per cent of world exports.

Brazil and Israel have dramatically improved their ratings, up from little or no enforcement in 2015.

Four countries, accounting for 6.7 per cent of world exports, have declining levels of enforcement – Austria, Canada, Finland and South Korea – with the biggest slide in Finland. The Netherlands has a limited enforcement. 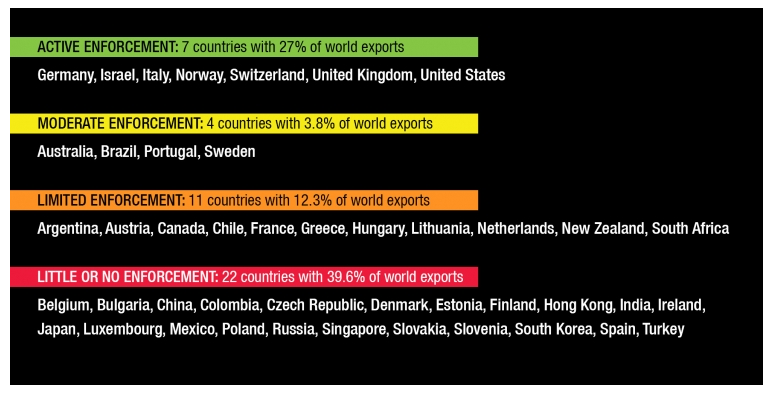 For the first time, this year’s report evaluates China, the world’s largest exporter, as well as India, Singapore and Hong Kong,which are each responsible for more than two per cent of global exports but are not signatories to the OECD Convention. They are, however, parties to the UN Convention against Corruption, which also calls for enforcement against foreign bribery. Transparency International urges them to join the OECD Anti-Bribery Convention.

“It is unacceptable that so much of world trade is susceptible to consequence-free corruption,” said Delia Ferreira Rubio, Chair of Transparency International. “Governments have promised to implement and enforce laws against bribing foreign officials under the OECD and UN conventions. Yet many are not even investigating major cases of grand corruption, which involve state owned enterprises and senior politicians. These have an especially corrosive effect, and ultimately impact the ordinary citizens of the country the hardest.”

The OECD Convention requires signatory countries to criminalise bribery of foreign public officials and introduce related measures. Transparency International examined the countries’ enforcement according to available data from the past four years, relative to their share of global exports, and ranked them in four categories: “Active,” “Moderate,” “Limited,” and “Little or No” enforcement. The countries reviewed are responsible for more than 80 per cent of world exports.

Gillian Dell, author of the report, said: “Authorities not only need a strong legal framework for going after businesses that pay bribes abroad, but proper resources for the agencies responsible. In many countries, the courts, as well as investigators and prosecutors of cross-border corruption crimes, have inadequate means to do their job.”

Besides stepping up enforcement efforts, Transparency International recommends that governments:

In addition, the OECD Working Group on Bribery should make greater use of public announcements to name and shame countries that are not enforcing against foreign bribery, related money laundering offences and false accounting violations.