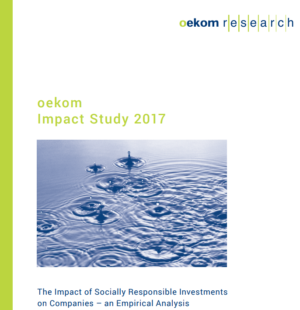 In its new Impact Study 2017, an extended new edition of an earlier study from 2013 on the influence of the responsible capital markets, oekom research sees a clearly positive development. The impact that responsible investors, banks and rating agencies have on the companies’ sustainability efforts has increased considerably since the last survey in 2013. Over 36 percent of companies, an increase of four percentage points from four years ago, confirm that the requirements of sustainability analyses have an influence on their general business strategy.

The oekom Impact Study 2017 was conducted in partnership with PRI (Principles of Responsible Investment). In total, 3,660 companies were surveyed, of which a total of 475 companies from 36 countries and across 50 industries participated. The study was supported by Metzler Asset Management and the Evangelische Bank, as well as further institutional investors and asset managers.

Drivers for sustainability
• Companies regard sustainability rating agencies as the primary driver of sustainability, with 61.3 per cent of respondents stating it was this that initially motivated them to address sustainability. Almost as influential, at 60.3  per cent, are the demands and expectations of the companies’ customers. In the first Impact Study in 2013, the top two places
were reversed. In third place were regulatory requirements at 56.3  per cent, significantly higher than the 37 per cent registered in 2013.
• Future expected drivers for sustainability are somewhat different: seen as the #1 motivator by a significant margin are customers’ demands, at 66.8  per cent; this is followed by regulation at 54.1  per cent, shareholder initiatives at 46.6  per cent, and conventional financial service providers’ activities at 45.6 per cent. 41.4 per cent of the respondents continue to see sustainability rating agencies as the most important drivers.

• For almost 90 per cent, a good sustainability rating was regarded as important. For 78 per cent of the companies, it is important to be included as a constituent of sustainability funds and indices. 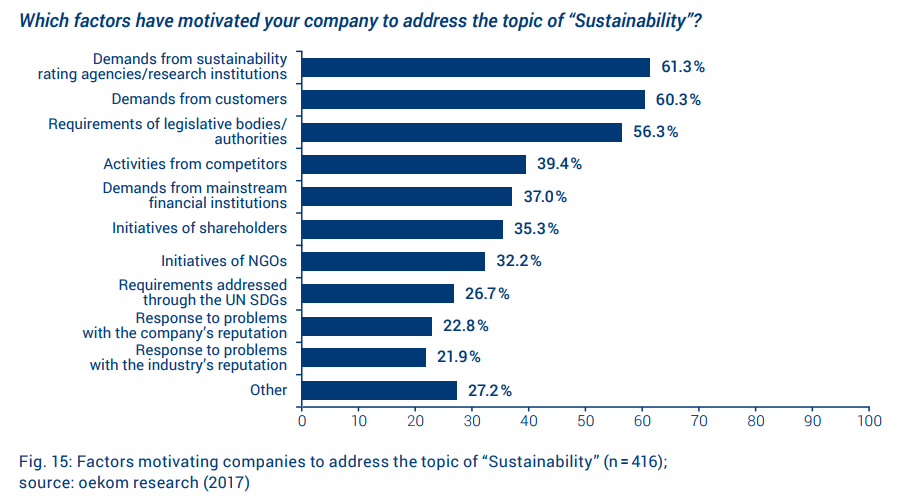