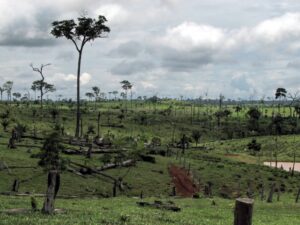 Nutreco today announces it is the first feed company and one of the first three companies worldwide to lend its support to a new initiative designed to help end soy-associated deforestation in one of Brazil’s most important areas of biodiversity.

The ‘Funding for Soy Farmers in the Cerrado’ initiative aims to conserve native vegetation and biodiversity in the Cerrado region, halting deforestation by providing financial incentives to farmers to produce soy only on existing agricultural land. The Cerrado region is a globally significant carbon stock but 250 million tonnes of carbon have been released annually from deforestation in this landscape – equivalent to the emissions of 53 million cars. The Cerrado is also one of the most important Brazilian regions for water production being responsible for 40% of Brazil’s freshwater that is essential for agriculture.

The Funding will support the Cerrado biome to become a verified zero deforestation area for soy. Conservation experts like the WWF support the need for financial incentives for soy farmers to protect the Cerrado. With its two divisions Trouw Nutrition for animal nutrition and Skretting for aquafeed, Nutreco has pledged to commit €1 million to the fund over the coming five years.
Nutreco CEO Rob Koremans says, “This initiative is a new breed of conservation protection, which recognizes responsible action by landowners interested in tackling climate-related issues especially in environmentally critical environments and biomes. We are delighted to be working alongside Tesco and Grieg Seafood to protect the Cerrado and prevent further deforestation in the area. Soy is a key ingredient in global animal and aquaculture feed production and I hope that other companies, particularly within the feed industry, will come forward and commit to this initiative over the coming months.”

World Wildlife Fund US SVP Markets Jason Clay comments, “Nutreco should be lauded as the first feed company in this global effort to eliminate deforestation and grassland conversion while still producing the products needed to feed the world. Private sector initiatives like this can provide the critical finance needed to support farmers while we transition to new business models and mechanisms that produce much-needed food and protect not only the Cerrado but similar habitats around the world.”

By pledging support to the initiative, Nutreco is continuing its long-term commitment to supporting efforts to preserve the Cerrado region. In October 2017, Nutreco was one of 23 founding signatories of the Business Statement of Support to the Cerrado Manifesto. At that time, Nutreco was the first and only business-to-business founding signatory. Today, over 140 companies have signed this Statement of Support.

The ‘Funding for Soy Farmers in the Cerrado’ initiative has invited the Brazilian soy industry to lead the development of a financial mechanism that can distribute the funds in a way that reaches the goal of halting soy-related deforestation of the Cerrado. Preliminary studies show that a total of US$250 million is needed to reach this goal.

Quotes from soy farmers in the Cerrado:

Paulo Rickly, Soy Farmer Cerrado (Maranhão) “We—producers of soybeans and other grains in the Brazilian Cerrado region—are aware of the need to preserve the biome not only because of its great biodiversity, but also because the Cerrado is where the springs of the main watersheds in South America are born. The Cerrado´s vegetation is a “sponge” that absorbs rainwater and feeds the groundwater and aquifers that will give rise to rivers. In addition to other factors such as evapotranspiration, regulation of temperature gradients, wind barriers, among others, so this idea of payments for environmental services comes at a good time, as it will certainly help to keep most of these areas preserved.”

Cesare, Soy Farmer Cerrado (Maranhão) “The movement for the preservation of the environment observed in Brazil should not only be an external pressure event, it is important to use tools such as payments for environmental services as an incentive. These payments express the worldwide commitment of all those involved in the food production chain to embrace sustainability. The applicability of tools like financial mechanisms are mandatory to achieve preservation and maintenance of the environment.”

Gabriel Couto, Soy Farmer Cerrado (Maranhão) “Preserving forests is one of the biggest challenges for developing countries like Brazil. We are aware of the importance of native vegetation to maintaining rainfall regimes, as forests control climate through evapotranspiration. Brazil’s role in favor of the Amazon has been closely watched internationally and the country’s reputation for agriculture will depend on maintaining high levels of production in an environmentally sustainable manner. Thus, payments are a direct way to curb deforestation. For the farmer who is not yet aware of the global importance of forests, this incentive would give him a direct economic reason to contribute to the preservation of his reserves.”

Luiz Pradella, Soy Farmer Cerrado (Bahia) “Payment for Environmental Services is recognition of the very few individuals that contribute to the good of all. We must socialize the benefit and the cost as well. Environmental services are for the planet, so the service provider (farmer) should be rewarded for it.”

Benildo Telles, Soy Farmer Cerrado (Mato Grosso) “I believe it is possible to produce sustainably while preserving forests and soil, but receiving payments for environmental services is critical to that.”

Gisela Introvini, Soy Farmer Cerrado (Maranhão) “In the region of Maranhão and Piauí, we (producers) use RTRS certification and believe that payment for environmental services is a great tool for valuing those who get high production results through the technologies and systems that make it possible to produce in the same space: meat, soy and corn—and still contribute to carbon storage. ”

Deomar, Soy Farmer Cerrado (Mato Grosso) “Brazilian agriculture in the Cerrado regions carries very large burdens in relation to the maintenance of reserves. The farmer bears this cost for the benefit of the whole community, which receives benefits not only from the food production, but also from all the environmental services generated. There is an urgent need for society to be aware of this issue and understand that such a burden should be shared amongst all, given the social benefits that preserving the environment brings.”

This is The Best Response Yet 👏🏾👏🏾👏🏾 #MVO twitter.com/Alone2Rome/sta…