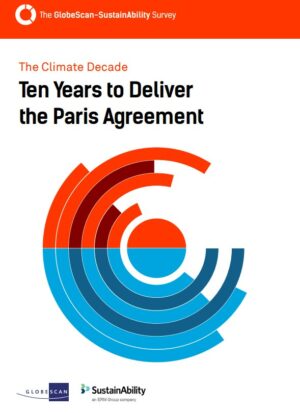 Released today at the flagship GLOBE conference in Vancouver, findings of a new report “The Climate Decade: Ten Years to Deliver the Paris Agreement” by GlobeScan and SustainAbility, show that experts see the coming decade as crucial for companies to make significant progress on their emissions targets in order to remain competitive. Two-thirds (67%) of experts across 66 countries say that companies need to become carbon neutral by 2030 or sooner to remain competitive. Unilever is again seen as a clear leader on climate change by almost one-quarter of sustainability professionals with Patagonia, Tesla, IKEA and Alphabet/Google rounding out the top five leading companies.

Sustainability experts warn that reputational harm to their businesses will be the most severe consequence for companies that are not adequately addressing climate change.  Inside their own walls, increased physical and financial vulnerability to climate related impacts ranks second in consequential impact, followed by a lack of access to capital and divestment. GlobeScan and SustainAbility asked more than 550 global experts representing business, government, NGOs and academia across almost 70 countries to evaluate progress on addressing climate change generally, and specifically on the track record of corporate action and leadership.

The study also identifies the companies that experts think are role models. Unilever is seen as a clear leader on climate change by almost one-quarter of sustainability professionals; Unilever was also chosen as a top climate leader in the two most recent previous editions of the survey (2017 and 2015, respectively). Consumer-facing and technology companies are most recognized by experts for their efforts around climate change, with Patagonia, Tesla, IKEA and Alphabet/Google rounding out the top five leading companies. As in 2017, Brazilian cosmetics manufacturer Natura continues to be the only emerging market company to make the top ten leaders list. Overall, progress on addressing climate change is seen as insufficient, with half of sustainability experts (49%) believing it is unlikely that we will avert major damage from climate change if we continue at the present rate at which society is making progress toward addressing the threat. Another 16 percent say that major damage to human, social, and ecosystem health has already occurred, while a similar proportion remains optimistic that there is still time to avert disaster.

Eric Whan, Director, GlobeScan commented: “Our latest research confirms that expectations of companies, and indeed of those who regulate them, are reaching new highs. The pressure is on for 2020, and experts are pointing fingers at both good and bad.”

Mark Lee, Executive Director, SustainAbility said: “This survey is a reminder that current action, while certifiably representing progress, is not enough to stave off major damage from climate change. There is still significant work to do, and we need all corporations, not just current leaders, to take immediate and rapid steps towards a low-carbon future.”

“These results underline the critical importance of more action and ambition on climate change across the board,” said Mike Gerbis, CEO of GLOBE Series and The Delphi Group. “At GLOBE 2020, it is inspiring to be among so many of the companies and individuals who are at the vanguard of sustainability and climate leadership, and we look forward to accelerating our collective impact over the next decade.”

The full report can be downloaded here.