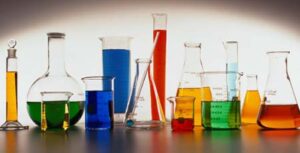 Major cosmetics, food, medicine and plastic producers across Europe are breaking the law by using millions of tonnes of chemicals without completing important safety checks, according to an analysis of government files. The European Chemicals Agency (ECHA) says this is a priority problem and acknowledged in November that two thirds of the 700 chemicals it has investigated break important aspects of the EU’s key chemical safety regulation REACH. Some are calling it ‘the dieselgate of the chemical industry’.

Today, Germany’s largest environmental charity BUND, a member of the European Environmental Bureau, revealed some of the chemicals, companies and sectors implicated. It used freedom of information rules to obtain details of a German government investigation into chemical safety files from 2014 which concluded that 940 substances did not meet REACH data safety standards. Transparency barriers blocked BUND from verifying whether most of the chemicals remain non-compliant today. But 41 substance dossiers were unchanged from 2014 to 13 April 2019, the date BUND concluded its analysis, therefore:

Between 12 and 121 million tonnes of the 41 chemicals are used in Europe annually. Some are widely found in industrial and consumer products, including toys or food contact products. They include:

Daily exposure to a mix of toxic substances is fuelling growing rates of cancer, reproductive disorders, metabolic diseases such as diabetes and obesity, and neurodevelopmental damage among other health problems. Chemicals of concern are ubiquitous in food, water, products, our homes, workplaces and are found in even the most remote environments. They enter our bodies mostly by ingestion, but also through the skin and lungs, typically via dust and vapour. Over 300 industrial chemicals are found in humans today that were not present in our grandparents. Babies are described as born “pre-polluted”.

Tip of the iceberg

The true scale of the problem may be much larger, but transparency barriers prevented BUND verifying the compliance status of around 700 of the 940 chemicals identified in the German investigation or the identity of more than 5,000 out of nearly 7,000 responsible companies. Precise numbers were impossible to obtain due to duplicates, typos and 124 cases where the company names are marked as “confidential”.

The investigation commissioned by the German Environmental Agency and conducted by the Federal Institute for Risk Assessment (BfR) checked all 1,814 “high volume” substances, used above 1,000 tonnes per year, registered by companies with ECHA by March 2014. Officials focused specifically on tests into possible threats of “highest significance for human health and environment”, including carcinogenicity, mutagenicity, persistence, bioaccumulation, reproductive and developmental toxicity. The mandatory test results underpin any EU regulatory measures, which can include bans or restrictions.

The German officials announced in 2015 that only 1 out of 1,814 substance dossiers fulfilled all test requirements and was legally compliant. The finding triggered BUND’s freedom of information request. The final study in 2018 did not report on binary compliance, pass or fail, but on the availability of the various test results. The German officials announced that, on average, 32% of mandatory tests were missing, while 37% were “complex”, meaning too hard to judge. They established that ECHA has historically failed to apply the ‘no data, no market’ rule (REACH Article 5), a completeness check applied prior to market authorisation, allowing chemicals with missing safety data onto the market in high volumes.

In March 2018, BfR finally identified for BUND the 940 chemicals that it had “assessed as non-compliant”, but refused to name any of the nearly 7,000 companies involved, citing commercial confidentiality. A ‘lead registrant’ company files for permission to use a chemical and alone is responsible for adding safety test results on behalf of any consortium of firms. Since ECHA refuses to publish the nature of any updates and in most cases the identity of the lead registrant, BUND was blocked from confirming the status of all but 41 substances. These were the chemical dossiers not updated by the lead registrant in any way since the BfR data pull in 2014. Though the lead registrant registers safety data, all firms that are part of a dossier are responsible for non-compliance.

ECHA has long known about safety data gaps. A 10 year review of 2,000 chemical dossiers covering 700 substances found that 70% had missing safety data. Its latest annual report found “important safety information is missing” for 71% of substances. ECHA alone grants market access to chemicals and alone has the power to revoke it. It has revoked just 4 out of around 20,000 chemical dossiers since it was established, in 2007, to 2017, the last time it declared a revocation. It alone determines legal compliance, but does not clearly publish compliance status, making it difficult for downstream companies to assess risks and to other third parties, including the general public to scrutinise the information, contribute to decision-making and ultimately make informed consumption and investment choices.

National officials run a rolling programme to test several hundred priority chemicals and find half are dangerous in current commercial use. Action is needed, they conclude, but authorities at both national and EU level have failed to yet take action in three quarters of cases. National authorities are legally responsible for enforcing REACH, can fine firms or even shut them down in serious cases, such as where people are at risk. Despite REACH warning that non-compliance “can result in damage to human health and the environment” (REACH, recital 122), soft sanctions prevail, usually verbal or written advice. Tougher Nordic countries see higher compliance.

The chemical industry is worth €500 billion a year in Europe and is controlled by some of the richest and most powerful individuals. It claims safety is a priority, but complains about the costs of safety tests. A single registration costs industry around €80,000, while REACH saves taxpayers €50 billion in healthcare costs and a further €50 billion in environmental costs, according to the European Commission. The benefits “dwarf” the costs, it says (video: 3:34).

BUND chemicals policy officer Manuel Fernandez said: “Chemical companies have been disregarding the law for years and getting away with it, selling substances that might cause hormonal cancers, brain disorders and other severe health problems. As consumers, we are kept in the dark, not knowing if everyday products are safe or not. What we do know is that EU and national authorities need to raise their game in a big way.”

EEB chemicals policy manager Tatiana Santos said: “This should worry investors and downstream companies as much as citizens. Thousands are handling substances that could cause them major brand or financial problems. ECHA has sat on this problem for years. We see the agency moving in the right direction, but why all the secrecy? The very foundation of EU chemical safety rules are being ignored. BUND revealed the tip of the iceberg; now it is on ECHA to tell us the rest. We have a right to know if chemicals are safe or not. REACH is the best, most ambitious chemical regulation in the world and one that made us proud to be Europeans when it was first created. But that counts for little if it is not taken seriously.”

The NGOs want ECHA to clearly identify all non-compliant substance dossiers and responsible firms in its main database. ECHA should retrospectively check non-compliant dossiers identified by BfR for completeness, as well as improve, increase and speed up its compliance checks. National authorities should increase transparency and impose tougher sanctions, including fines, name and shame or criminal proceedings without delay, they said.

Ms Santos will confront regulators and industry representatives tomorrow when she speaks at a chemical safety conference. She will raise the topics of compliance and public trust.

Read Cefic’s Reaction To The BUND Report: We Are Making REACH Work