Most oil majors have set climate ambitions that leave them free to increase production or ignore the full impact of burning their future oil and gas, finds a report by Carbon Tracker totay that uniquely ranks the strength of their corporate climate policies.

It shows that companies such as Shell and Total are setting out ‘net zero’ ambitions without committing to the absolute reductions needed to link to finite climate limits, while targets set by their US counterparts ExxonMobil, Chevron and ConocoPhillips ignore carbon released when their oil and gas is burned.

It also notes that companies’ emissions targets can give investors an insight not only into how closely aligned they are with the Paris climate targets but also how well they recognise the impact the energy transition will have on their traditional business models.

Companies that recognise there are climate limits to the oil and gas that can be burned are likely to take more cautious investment decisions while those whose policies allow for continued growth may invest in higher cost projects that rely on continued growth in demand.

Through a unique approach[1], Absolute Impact analyses and ranks emissions targets following a flurry of new industry announcements at the end of 2019 and finds big differences in their effectiveness at contributing to climate change mitigation and reducing the risk of stranded assets.

Mike Coffin, Oil & Gas Analyst and author of the report, said: “Companies cannot be aligned with Paris unless they commit to only sanctioning Paris-aligned projects – this will have the knock-on effect of absolute cuts to their oil and gas production and resulting emissions. On their own, net zero targets are insufficient to link to Paris goals. To do that, climate targets need to recognise the absolute limits of a global carbon budget and incorporate interim emissions reductions. Policies which fall short will fail to satisfy both environmental and financial concerns from investors, and risk being perceived as greenwashing.”

Carbon Tracker found that corporate policies fell broadly into three levels of ambition with a major gulf between US and European companies:

“In a world of decreasing demand for oil and gas, only the most cost-competitive projects will generate value, and even they will potentially deliver lower than expected returns,” it states.

However, the report warns that, despite growing acceptance that demand for oil and gas will peak in the next decade, most companies plan to increase oil and gas production and therefore risk creating considerable stranded assets.

The report notes that each company frames its emissions targets differently and defines pre-requisites for metrics to be considered as linking to Paris goals that the think tank terms “Hallmarks of Paris Compliance” . These are: 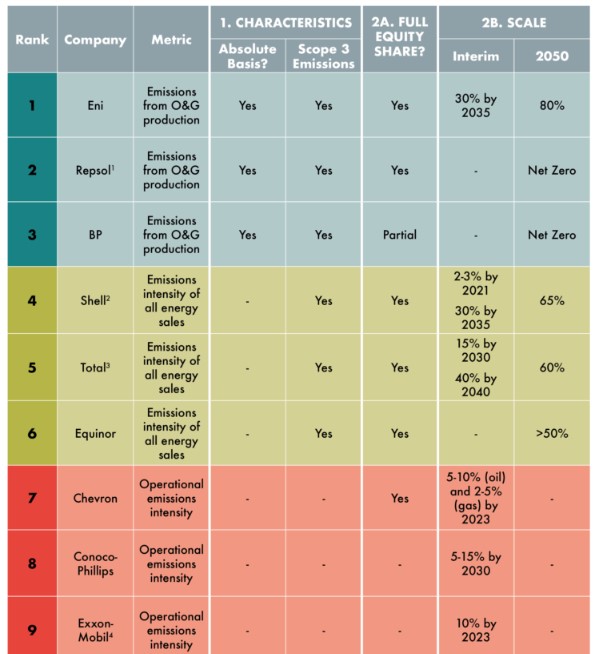