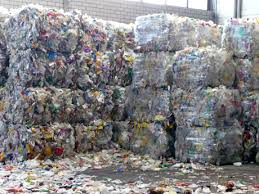 Europe is falling behind on its race to meet the European Union (EU) target of 90 per cent collection of plastic bottles by 2030 according to new research by ICIS. Results of the ICIS survey of the European RPET (recycled polyethylene terephthalate) industry in 2019 show that progress has been made, but this progress is being threatened by inadequate collection strategies and high contamination levels when it comes PET bottles.

Overall, the region saw a recycling rate of 46 per cent a rise of two per cent on the rate in 2018. “This is a marginal improvement, but still less than half of the bottles put into the market are recycled,” Helen McGeough, Senior Analyst of Plastic Recycling at ICIS said. “Given that PET is one of the most recyclable polymers in the market and the recycling infrastructure is more mature than other polymers, the question remains as to why this is not advancing to higher recycling rates.”

“This reflects the wider issues facing the sector in terms of a collection and sorting infrastructure managed principally by national governments that have not invested in systems to manage the proliferation in waste composition and consequently can produce poor quality recyclables. The recycling sector inherits materials with reducing yields while end-users demand even higher quality R-PET output” added McGeough. 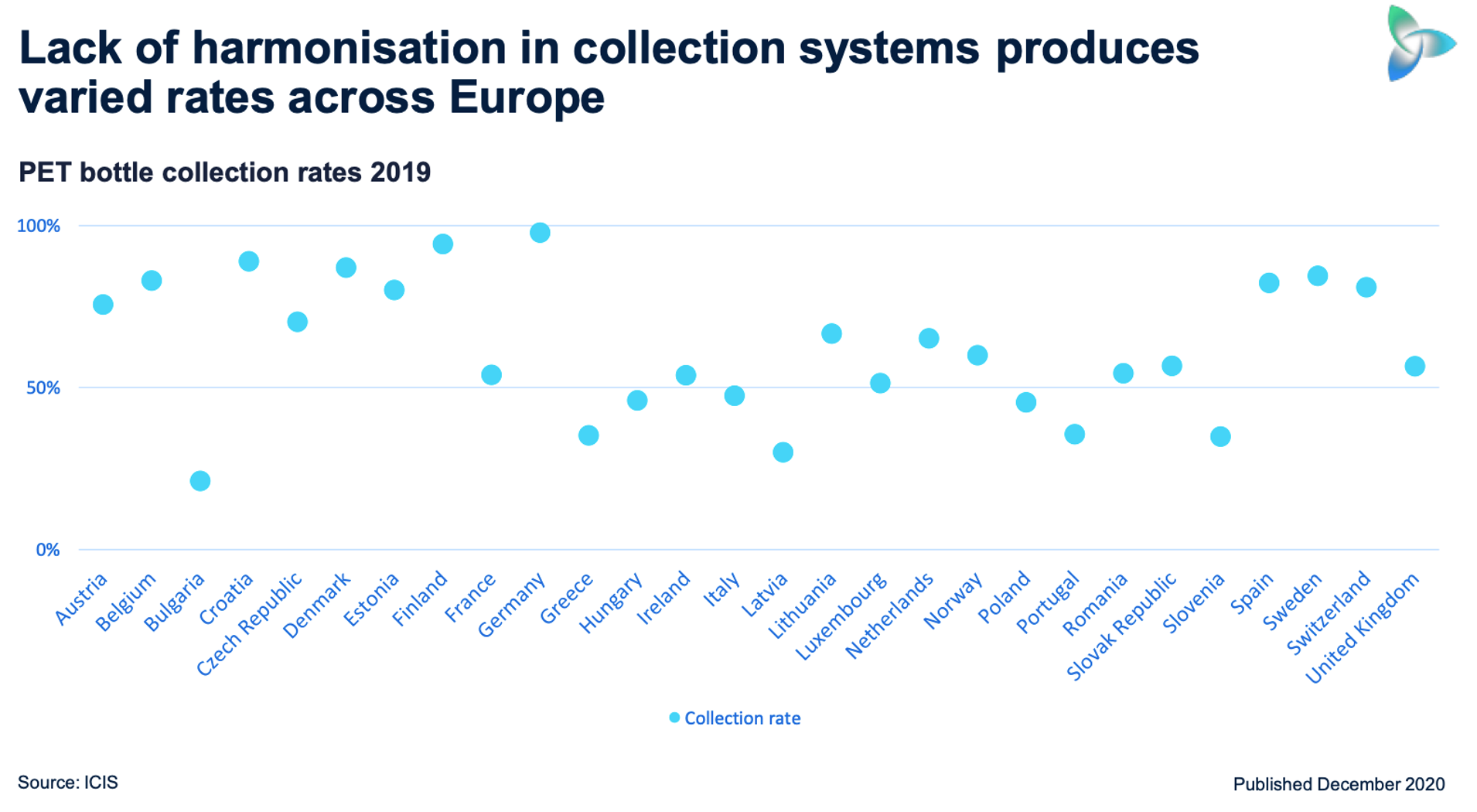 Failings of the collection strategy

The PET recycling industry responded to the boom in demand for R-PET supply during 2018 by increasing its capacity by 11 per cent. However, not only did collection rates not match this growth in capacity but nor did the availability of the highest quality colourless bales. Deposit return scheme (DRS) bales represented 31.6 per cent of the total supply compared to 33 per cent in 2017.

Although the feedstock supply may have increased in volume, so too did contamination levels. The average yield across the region was 69.5 per cent in 2019, down from 71 per cent in 2018. According to McGeough this was “unsurprising given the reduction of PET waste exports to China, due to the waste import ban, and pushback from other Asian markets unable and, or, unwilling to accept shipments and become a dumping ground for the rest of the world. These typically lower-quality materials have since been absorbed into the domestic waste stream and contribute to the overall reduction in yield.”

The key drivers to the R-PET market are brand pledges and legislation, mainly the SUP Directive which mandates the use of recycled content in bottles, pushing the supply increasingly towards the bottle market.

The bottle industry must achieve 25 per cent recycled content in PET bottles by 2025 (under SUP Directive), and the study shows growth in the R-PET penetration of the food contact bottle market at 14.5 per cent, rising from 10.7 per cent in 2018. However, this is still over 10 per cent below the mandated target and way below the ambitions of influential brands going way beyond these levels, up to 100 per cent for segments of their portfolios.

The ICIS report showed that in 2019 the share of R-PET supply absorbed by the food contact bottle market rose to 32 per cent compared with 25 per cent in 2018, reflecting this trend and pull through the supply chain from significant beverage brands ambition to offer more sustainable packaging for their product as consumer pressure continued to build after the extremely high profile of plastics pollution in the natural environment – often cited as the Blue Planet effect. 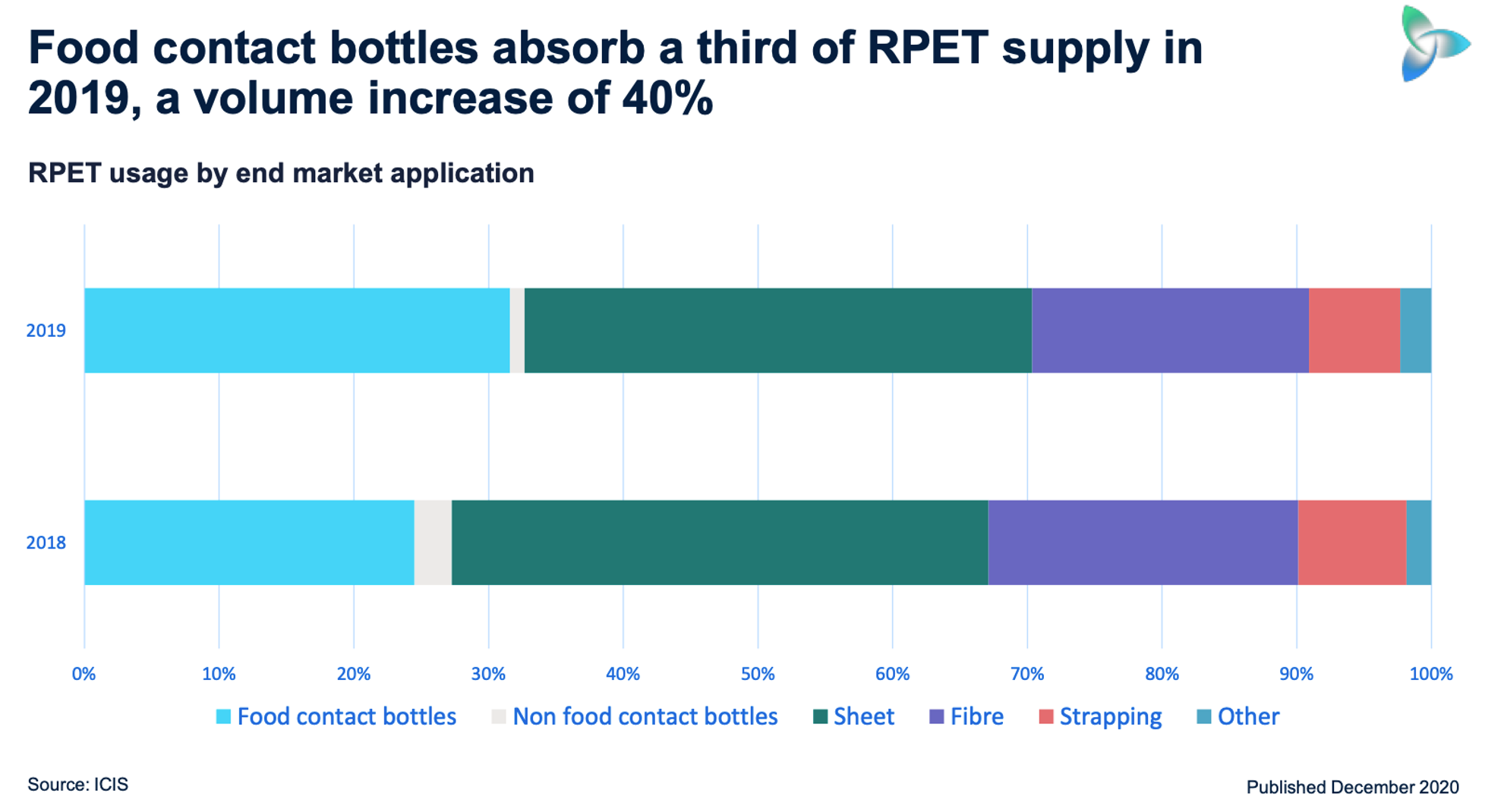 “The 2019 survey shows improvement in many aspects of the R-PET supply into the market,” McGeough concluded. “However, there are still challenges to overcome, mainly at the front end of the chain. These include the improved collection in terms of quality as well as quantity, improved design for recycling and sorting to reduce waste rates, and growth in the supply of highest quality R-PET to meet the frantic demand of bottlers.”

@thhgurutv @DaniLeigh Itz Sad that U Had to Explain UrSelf And Ur Music Like This. Music is one Topic that should be Left UnBothered. 🎼The Message comes from the FingerTips of the Composer #MVO

Interesting symposium on the position of #animals in #thegreendeal: they are hardly there. I will be presenting my #thesis: #animalbusiness. Mark that the overbred cat is not on my lap! @maasuniversity⁩ #eu #ethics #csr #mvo #leadership pic.twitter.com/aAVC7I3MyV

i’m a Christian but shez Catholic..When itz time, do we Christen or Baptize Our Baby 🤔🤨🧐..Cant i do Both or is that SetTrippin? 🧐 #QTNA #MVO