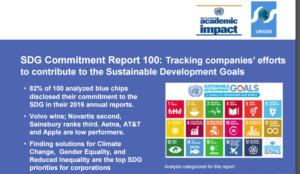 European and Asian companies realize the greatest advantage by positioning their methods for production and delivering their goods in line with the United Nation’s 17 Sustainable Development Goals (SDGs). This is the outcome of the first SDG Commitment Report (SCR100) launched today at the United Nations headquarters in New York City.

Truckmaker Volvo wins, Novartis comes second and Sainsbury ranks third – while US companies such as AETNA, APPLE and AT&T are at the other end, not yet materially embracing the SDGs in their annual reports released for 2016. “Sustainable development goals provide a framework for investing in a compelling future“comments Alfred III Berkeley, former President Nasdaq and Chairman of Princeton Capital Management on the SCR100 results at the UN in New York.

The research behind the SCR100 was provided by UNGSII Foundation (www.ungsii.org) supporting all existing initiatives in the field of sustainable and social development. UNGSII analyzes how each of the world’s most profitable and largest 100 blue chips corporations (with a combined market cap of $9.781 trillion USD) disclosed their activities around the 17 SDGs. “While a global sustainability Index may be only one small element of many to meet this challenge, it is an essential one because it helps to structure the investment flows of the future” comments Dr. Joachim Faber, Chairman of the German Stock Exchange in Frankfurt – the takeaway of the UNGSII Research.

The UNGSII Foundation was initiated in 2014 at the Palais de Nations in Geneva after it became clear that all of the world’s Nations would come to agree to achieve all 17 SDGs by 2030 latest. According to United Nations Conference and Trade and Development (UNCTAD), the global investment needs for the realization of the SDGs is on the order of $5 trillion to $7 trillion per year. Estimates for empowering the developing countries to fully realize the SDG’s alone ranges from $3.3 trillion to $4.5 trillion per year.

The International Standard Organization ISO is providing support to create Indexes based on the UNGSII research in order to create transparency and a better understanding of how the implementation of the SDGs in the corporate world can create value for investors as well as consumers. Climate Change (SDG13), Gender Equality (SDG5) and Quality Education (SDG4) are among the top activities expressed in the Annual Reports just filed by the 100 companies. “Already 24% of all analyzed companies explicitly refer to the implementation of the SDGs” explains Matthias Vollbracht, Director Index Department at UNGSII the results in New York. Roche, Deutsche Telekom and BASF rank best in this category.

“Deutsche Telekom is able to provide innovative products as we invest in a sustainable environment for our customers and employees” commented Dr. Christian von Reventlow, Member of the Board, Deutsche Telekom. “After the global trust meltdown, governments as well as the corporate sector need metrics to prove to their voters, consumers, and future employees that they walk their talk. Very soon there will be no public tender possible without asking for the SDGs credentials of each applicant” explains Roland Schatz, Founder of UNGSII, the purpose of the foundation.

To make this analysis UNGSII’s human analysts categorized each of their Annual Reports in the first year after all heads of states had signed the global goals in September 2015. To do so UNGSII categorized all 286,869 statements issued across 100 Annual Reports, then compared these legally binding self declarations with 1,843,410 reports in international business print media; and 1,149,782 quoted financial analyst statements across international business print media. This effort allowed UNGSII to reconcile whether or not the SDG practice described in the Annual Reports – if any – would resonate with how business journalists and financial experts perceive these companies. According to accounting professionals financial reporting discloses only 30-60% of the real value of a company. To capture tangible information on non-financial topics,

UNGSII Research focusses on the text part of these annual filed documents, as those sections are signed by the Chairman, CEO and CFO and therefore legally binding – in contrast to the Sustainability Reports published by Companies. i’m a Christian but shez Catholic..When itz time, do we Christen or Baptize Our Baby 🤔🤨🧐..Cant i do Both or is that SetTrippin? 🧐 #QTNA #MVO