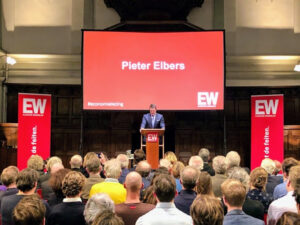 A year ago, Royal Dutch Shell CEO Ben van Beurden delivered the first Elsevier Economics Lecture on the need for an energy transition. Yesterday, KLM President and CEO Pieter Elbers took an in-depth look at the global drive for sustainability in the air transport sector. He presented his case for the broader value of air transport and how innovation can keep flight fit for the future.

In line with KLM’s hundredth anniversary, Elbers spoke about the five functions of air transport and the industry’s added value over time. In the beginning, of course, flight was a new exploration. It was also a catalyst for confirming peace and security by connecting countries and states. Air transport also serves as a driver for prosperity, since connecting economies promotes global trade. Over the decades, flight has developed from a privilege for the “happy few” into a means of travel for the “happy many”, contributing to the overall sense of wellbeing. Finally, air transport serves an important purpose as an innovator.

Air transport as an innovator

Economic growth can never be taken for granted. The survival chances for companies are diminishing. Their continuity is also never certain. Modern companies are digitising existing services and growing exponentially. The bigger they get, the faster they transform the existing market. To stay relevant in an economy like this, it isn’t enough just to keep doing what you have always done. Pieter Elbers stated that air transport needs to keep exploring and innovating to meet current challenges.

In 2010, KLM took the lead by becoming the first airline to develop a successful social media strategy, and it still leads the way in serving its customers digitally. KLM continues to seek new ways to stay ahead.

As the world’s oldest airline, KLM also has a duty to future generations in terms of providing employment and maintaining a healthy environment. For KLM, sustainable growth is about social, ecological, and economic factors. That means retaining prosperity and wellbeing for future generations.

By innovating in sustainability, the air transport industry has succeeded in reducing carbon emissions against the trend of a growing economy. Since 2005, the KLM Group has managed to reduce emissions per passenger by almost 20%. This is just one reason why KLM and Air France have stood at the top of the Dow Jones Sustainability Index for the past fifteen years.

It has done this by replacing aircraft with more energy-efficient ones, innovating its operations, and finding smarter and shorter routes to fly, to name just a few examples.

KLM’s recent Fly Responsibly initiative has been welcomed worldwide. KLM’s ambition is to become, and remain, the world’s most sustainable airline. That requires a different way of thinking and working. KLM is working with aviation-associated companies, employees, and passengers to create a more sustainable future for aviation. That is why it is following up on the “Smart and Sustainable” action plan for the Netherlands by introducing a plan to make all European air transport more sustainable.

In addition, IATA 2020 will be held in Amsterdam, offering a great opportunity to join airlines worldwide in taking sustainable aviation a step further.

KLM remains committed to keeping air transport fit for the future. By continuing to explore and innovate, it will continue to be relevant and help to build a prosperous society for this and future generations.

DJ: Plays “Knuck if You Buck” Nobody: All Orgs & D9 of a HBCU: ⬇️ #MVO pic.twitter.com/9xPkBHwPde

“When You Realize You Gota Shit” #MVO pic.twitter.com/DP0tYlJVAP

One week until the release of my first album ‘Homesound’. Here are the tracks! Out into the world on Oct 31st 😎 #homesound #mvo #newmusic #mvomusic #album #musician #producer #singersongwriter #guitarist #independentmusic #homestudio pic.twitter.com/jeWTywH4Vl