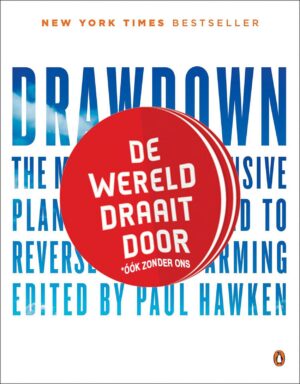 The Intergovernmental Panel on Climate’s (IPCC) report on 1.5°C stated that we could go past the 1.5°C warming limit as early as 2030 unless all sectors of the world economy were transformed, with steep cuts to greenhouse-gas emissions and massive scale-up of carbon sequestration. DrawDown is the plan to stay within 1.5°C warming. DrawDown will be introduced in The Netherlands on the 18th National Sustainability Congress on November, 8. The first copy of the Dutch translation of DrawDown will then be offered to the Dutch minister Stientje van Veldhoven.

The IPCC gave 33 pages of recommendations to policy-makers on the action neatly summarized as 5 steps in this BBC article.

Is there a plan or a roadmap that gets us there? And how much would it cost and save us?

It turns out that there are not one but 3 science-based plans that work together to stay within 1.5°C : Drawdown –80 science-based existing solutions & practices to reverse global warming –, the Exponential Climate Action Roadmap -to halve greenhouse gas emissions by 2030- and The Solutions Project -100% renewables electrification by 2050-

Drawdown saves $74.4 trillion for just 60 of Drawdown’s solutions at a cost of $29.6 trillion for 55 solutions over 30 years. The Solution Project’s 100% renewables electrification for 139 countries produces a net increase of over 24 million long-term jobs; an annual decrease in 4-7 million air pollution deaths per year; stabilization of energy prices; and annual savings of over $20 trillion in health and climate costs

Implementing these roadmaps would have the added benefit of needing much less and perhaps even no energy crops to sequester carbon, as food and land-use natural climate solutions account for 45% of Drawdown.

What can we do as individuals and how important should these roadmaps be to policymakers?

As individuals we can put into place 30 of the 80 Drawdown solutions. Policymakers, particularly at the national level as they draw up their plans -Nationally Determined Contributions- to cut and sequester greenhouse-gas emissions by 2030 are critically important decision-makers for our future. They should look to all 3 roadmaps on how they can keep the world within 1.5 degrees C global warming and use the science-based solutions they contain to map out a better world for us all.

DrawDown will be introduced in The Netherlands on the 18th National Sustainability Congress on November, 8. The first copy of the Dutch translation of DrawDown (by Maurits Groen and Climate Cleanup) will then be offered to the Dutch minister Stientje van Veldhoven and Chad Frischmann, Vice President & Research Director at Project Drawdown, where he leads the Drawdown Coalition, Senior Research Team, and Fellowship Programs. Chad will also give a plenary speech at the congress.

The Dutch version of the book DrawDown can already be ordered here! 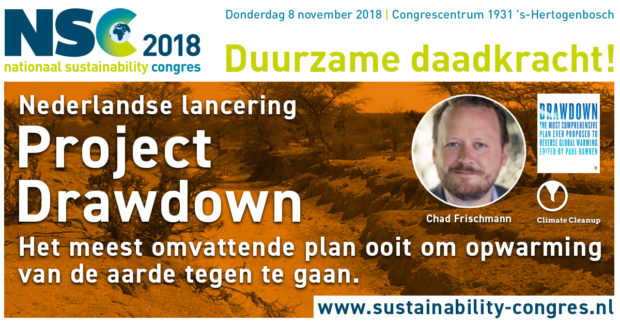