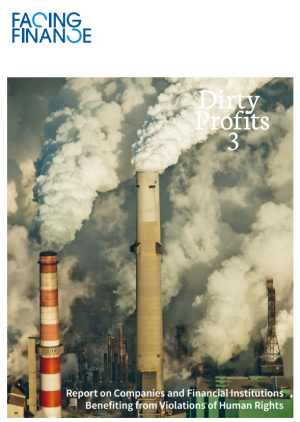 In anticipation of the International Day of Human Rights (10.12). FACING FINANCE is launching their new report entitled DIRTY PROFITS 3. The report is a joint project by civil society organisations, with research and information provided by over 30 authors from 10 countries.

The report documents sample cases of serious violations of internationally established norms and standards. It investigates 25 controversial companies that in 2013 had a joint revenue of approx. €4.196 trillion andd achieved net profits of €450 billion. Companies that have been seelected include some that are blacklisted on investors exclusion lists, others that do not comply with international or national law, or those that face serious allegations by the media or civil society. DIRTY PROFITS 3 also investigates the extent to which these companies are supported by European financial institutions.

‘It is apparent that human rights violations, corruption, exploitation and environmental and climate destruction still form part of the business models of multinational corporations and their financial investors’ states Thomas Kuechenmeister of the NGO Facing Finance, an organisation that stands up for human rights and environmental concerns.

The report documents pharmaceutical companies, which have been involved in serious and widespread corruption, and whose poor clinical trials in India resulted in thousands of victims. The report also looks at companies that are responsible for massive CO2 emissions contributing to the destruction of the earth’s climate. ‘Companies such as Chevron, Shell, Gazprom and Coal India belong to a global group of companies producing some of the highest CO2 emissions. Those who accept and finance these business practices say goodbye to limiting global warming at a maximum of two degrees. It is time for banks and investors to stop financing those companies’ stressed Regine Richter, of urgewald.

Moreover, the NGO criticises the abuse of labour rights in the textile industry. ‘As long as textile companies such as GAP or Walmart shirk their responsibility for the workers in their supply chain and as long as they continue to undermine sector-wide reforms, the workers wiill continue to toil under inhumane conditions in unsafe factories with poverty wages’, stressed Silvie Lang of the Clean Clothes Campaign Switzerland, in relation to the refusal of numerous brands to commit to the Bangladesh Accord on Fire and Building Safety or to provide compensation to victims of factory accidents.

Furthermore, the report also looks at the soaring demand for agricultural land. Since 2000, more than 49 million hectares of land in developing countries have either been leased to companies, or are currently being negotiated. ‘We urgently need legal protocols which ensure that banks, pension funds and other investors no longer provide financial services to companies engaged in illegal land-grabbing or environmental destruction’ , says Anne van Schaik of Friends of the Earth Europe.

Using the example of the company SodaStream, the report discusses the operations of international business enterprises and Israeli companies operating in the Israeli settlements in the Occupied Palestinian Territory, described as illegal under international law. ‘Israeli and international companies profit from the occupation, strengthen Israeli hold over Palestinian lands and inhibit or even prevent the development of independent Palestinian businesses in the occupied territories’, claims Rona Moran of the Tel Aviv based Research Center – Who Profits.

The report analyses legal sentences and fines levied on banks, such as BNP Paribas and criticises the concurrent lack of control over financial institutions. ‘ If we want to prevent the banking crisis of 2008 coming back and the many other banking scandals, we need reforms of the banking system and more civil oversight of financial decision makers’, claims Frank Vanaerschot of the organisation FairFin from Belgium.

During the research period (January 2012 – August 2014) the financcial ties between the 25 companies and the 24 financial institutions amounted to approx. €144 billion, as is shown in the research providedd by the Dutch organisation PROFUNDO. Of that amount, €67 billionn can be attributed to the major carbon emitters and a further €299 billion to controversial mining and commodity companies.

The FIs’ own internal guidelines do not prevent such investments, as they are too often non-binding, or not applied. In addition, binding legal regulation is currently lacking. DIRTY PROFITS 3 documents an array of voluntary commitments of companies and financial institutions that they consider sufficient. ‘Unfortunately the voluntary commitments of financial institutions and companies are not sufficient to prevent massive human rights abuses and environmental destruction,’ argues Thomas Kuechenmeister who supports the creation of further legal provisions for corporations and financial institutions to ensure human rights issues are incorporated into global business and financial decision making. DIRTY PROFITS 3 advocates for a rapid implementation of the UN Guiding Principles on Business and Human Rights.

A pdf version of the report can be downloaded here.