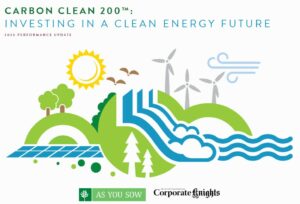 Bron
As You Sow

As You Sow and Corporate Knights today released their sixth update of the Carbon Clean 200™, a list of the 200 publicly traded companies that are leading the way among their global peers to a clean energy future.

“Given that oil prices rose by 30 percent in the past year, it is surprising that oil company stocks have performed so poorly, suggesting that investors may finally be breaking up with fossil fuels, as capital flows to better growth prospects in clean energy,” said Toby Heaps, CEO of Corporate Knights and report co-author.

“In 2016 people were saying, ‘if we divest fossil fuels there is nothing to invest in.’ We created the Clean200 to show investors around the world that the clean energy future is actually the clean energy present,” said Andrew Behar, CEO of As You Sow and report co-author. “Since then, we have been tracking and sharing the emergence of this economic paradigm. Clearly there are a broad spectrum of companies making the transformation that is our greatest hope to control climate change a reality.”

The following 7 companies are listed on the Clean200: