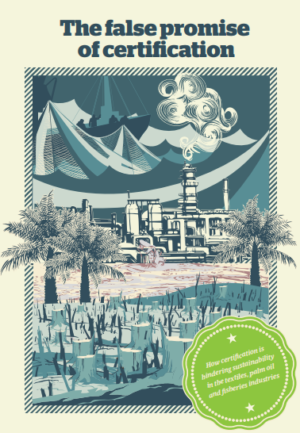 Many certification schemes which supposedly help consumers make environmentally  friendly decisions are actually standing in the way of greater sustainability and should  undergo serious reform, according to a new report.  The findings come in new research from the Changing Markets Foundation, which  investigated whether voluntary certification schemes for seafood, textiles and palm oil are  accurately guiding consumers towards sustainable products.

In the vast majority of cases,  the evidence of schemes’ benefits was lacking, while the report revealed many cases in which they provided cover for companies that are destroying the environment.  “Certification schemes are failing the environment and consumers, who increasingly want to  make ethical and sustainable choices. It’s time for a serious rethink about how we achieve  sustainability because the current system is broken,” said Nusa Urbancic, Campaigns  Director at Changing Markets.

The report investigated an array of voluntary initiatives that provide a company, product or service with a sustainability endorsement, ranging from product labels (such as the Marine Stewardship Council label for sustainable fish) to industry-wide initiatives aiming to improve the environmental performance of a sector as a whole (such as the Higg Index in textiles).

The report concludes that the schemes are so focused on getting a majority of industry players on board, or meeting thegrowing demand for certified products, that they have to lower their standards on sustainability.

“The main conclusion of this report is that certification has lost its way and that its contribution to creating a more sustainable world is minute,” says the report, which calls for the abolition of the worst certification schemes in the three sectors and the serious reform of others, based on the principles of transparency, independence, holistic approach and continuous improvements. The report also warns that voluntary certification schemes should not replace strong governmental and inter orangutans, elephants and rhinos. The report says that none of the certification schemes has been effective at slowing down deforestation, peatland draining or the loss of biodiversity.

Industrial fishing has devastated the ocean: nearly 90% of global fish stocks are either fully  fished or overfished. Two of the biggest certification schemes for sustainable fish, run by Friends of the Sea and the Marine Stewardship Council, certified over 9 million metric tonnes of fish each, in 2015. But the report finds that both organisations have certified fisheries which are overfished, have very high levels of by-catch and in some cases are at odds with national legislation.

The textile industry uses a quarter of the world’s chemicals and has been blamed for 20% of industrial water pollution, making it the second biggest polluter of freshwater on the planet. The report finds that despite the proliferation of certification initiatives there is no overarching scheme effectively addressing sustainability across the whole supply chain, and there is an acute lack of transparency in some of the most widely used schemes.

The main recommendations of the report are that:

In the absence of good certification schemes, governments, companies and consumers can take actions to further sustainability such as: prioritising small scale sustainable fisheries; establishing and enforcing marine reserves and science-based fishing quotas; introducing a moratorium on deforestation and peatland draining in the palm oil sector and establishing
zero pollution policies and greater supply chain transparency in the textile sector, for example through application of due diligence legislation.

The report, entitled The False Promise of Certification: how certification is hindering sustainability in the textiles, palm oil and fisheries industries, is based on qualitative research into the identified schemes, interviews with NGO experts and an extensive review of the academic literature.